I'm beginning to think that as something becomes less and less ¢
important, the more and more someone is going to write about it.

Take the apostrophe. Yes, please take it. Even while it seems to be going the way of the $2 bill, there are those who are trying to tell us our civilization is going to crumble if we don't stop the trend of not using apostrophes, not only correctly, but using them at all.

What about the cent symbol ¢ ? Amazingly I found out how to make it appear in this text, since it is no longer on any keyboard. Press the ALT key down and then type 0162. The symbol will appear. Yeah, that should bring it back, right?

The fact is, the cent symbol is really not needed, and no one seems to have waxed and waned as it disappeared from use. Items once upon a time could cost under a dollar. Thus, they were priced at an amount with a cent symbol following.

Since there doesn't seem to be anything you can buy that will be priced under a dollar, the need for the standalone symbol has disappeared. The apostrophe is harder to kill, but iPhones are working well as the apostrophe's executioner.

As usual, the people who complain about the dearth of the symbol that means something has been omitted are those who can remember English tests coming back to them with red marks pointing out the points that were taken off because you, as a lowly grammar school inmate, didn't use it properly in a sentence. They are also the ones who through the repetition of their teachers learned when to use apostrophes. No one likes to give up their exalted status.

I've written about the apostrophe before. My general theme runs to asking the question, "how do you pronounce an apostrophe?" No one else seems to pose that question. They are too busy telling us life without it is a return to being a Visigoth.

And there was another essay about the disappearing apostrophe in yesterday's Wall Street Journal's A-Hed piece titled, 'The Apostrophe Catastrophe: Its You're Smartphones Fault.'

As any reader of this section of the WSJ knows, it is always written with as many puns as possible. The headline of course--at least to those who know these things--cleverly points out the omission of the mark in a contraction, a possessive noun, as well as the misuse of the mark. It's a one line trifecta.

The story tells us of a woman, Carole Seawert, who shows up on Twitter in a robe decorated with apostrophes pointing out examples of the latest lapses. She is British, as you might expect, because the Brits seems to take changes to their mother tongue very seriously. Ms. Seawert tells us we're on a 'slippery slope.' There's that moral decline again. Her costume makes her look like a character out of  Harry Potter. 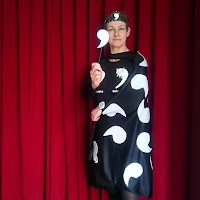 In 2001 I wrote to Russell Baker, who I have had a very intermittent correspondence with since 1967, asking him about what I detected were missing hyphens in the text of the newspaper he once worked for, the New York Times. Words that I remember like anti-aircraft were now smashed together to be antiaircraft. What gives?

Mr. Baker doesn't always answer my few letters, but on this occasion he did, and I keep it in a frame that I am looking at now. Over the years I've realized I've written to many writers, who sometimes reply. Even today I write to some, who do reply. The not-so-nice-thing is that their replies are emails, which don't have the style of the type of response like Mr. Baker's, who in 2001 punched out a reply on a typewriter on his personalized notepaper. It's a great response.

As to the missing hyphen, Mr. Baker told me:

"After awhile it no longer seems worthwhile to keep fighting. I surrendered to hyphen idiocy years before leaving the Times [1998].

I confess that I still rage against the jamming together of words to form corporate entities as in PBS's NewsHour, for instance. There are more born every day. It's a product of internetaddresstalk.gabble,  I guess. I think you can be excused for shooting on sight without asking questions."

I've seen older texts where today was hyphenated as to-day. Goodbye was good-bye. So, language does evolve as we know, and when the cowboy can no longer sleep under the stars with his horse, and not hear interstate traffic whiz by, we have once again moved from the past to the present.

I'm not sure, but I think the Smith-Corona typewriter that I still have in the garage rafters did have a cent symbol, ¢. I don't remember what else might have been on the typewriter's key. The A-Hed piece shows a rather straight mark that appeared as the upper case choice on the 8 key. The apostrophe on today's qwerty keyboards is also a straight downward mark. The so-called "dumb" kind vs. the correct right curved symbol, the "smart" mark.

The problem with using the apostrophe when typing text on a cell phone is that you have to bring up another keyboard on your screen and search for the mark. This is time consuming, and generally a bother. I don't text much, but I am tempted to forgo the apostrophe and just let the text go without it.  I don't however, because I was one of those kids who got points off for screwing it up and learned the rules instead so my grade didn't suffer. Nerd? Well, maybe.

As Nenagh Kemp, who led a 2017 study of texting at the University of Tasmania tells us in the
A-Hed piece, with text and social media, "the message  is the main thing, rather than the correctness of the spelling." Gee.

That tells us plenty. In writing about apostrophes, the journalist Mike Cherney reached out to someone from Tasmania. Can you find that on a map? (It's off the coast of Australia.) The academics all over are onto the disappearing apostrophe.

Apparently, Apple is somewhat coming to the rescue. Their iOS11 version will have "smart punctuation," even if their spokeswoman wrote an email omitting an apostrophe when using its instead of the contraction it's. Tsk. tsk.

Apostrophes aside, what about those other marks, those diacritical ones that are supposed to guide our pronunciation of certain words. I spent five years getting through three year;s worth of French in what would now he middle school and high school. I learned when there was to be an "accent grave" (downward) and an "accent aigu" (upward). I also learned that great one, the soupcon, that went under the c in garcon. Do French smartphones accommodate these marks? And what about that other one, the great umlaut? Can you find those on a keyboard?

If anything, these symbols should not go away, they should be available to increase the permutations when you create passwords. The so-called strong passwords use numbers and special symbols, and the more you can choose from, the greater the chance that your password cannot be cracked by someone in middle school
. Of course, why really be diligent about this when they steal the passwords anyway? Oh well.

Aside from using it in passwords, get rid of the apostrophe. Its about time.