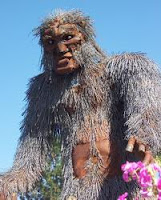 Many, many years ago the high school biology teacher, who was also our home room teacher, Mrs. Demas, zeroed in on me during the second day of class and asked me to explain the entomology of the word 'biology'.  I knew having a Greek name myself, and her having a Greek name, it was going to be a very long term if I didn't this one right.

I did. 'Bio', life; 'ology', study of. All these science disciplines have branches. But it wasn't until the other day when I read an 'A-Head' WSJ piece about 'hominology', a still-to-be recognized branch of biology that studies hairy, upright, walking creatures, that I realized I might be able to add something to scientific knowledge.

There are no authenticated photos of these animals. In different parts of the world the creatures go by different names and have different looks. The creature is generally known to us as the Abominable Snowman, also being called, Sasquatch, Bigfoot and Yeti.

Imagine, a whole scientific discipline devoted to studying the likes of Donald Trump, who goes around town like Major Strasser in Cacablanca and demands to see people's papers.

You're going to have to buy the paper itself, or crane your neck at a newsstand to see today's front page NYT picture of Germany's Chancellor Angela Merkel in her blue velour track suit chewing on a pencil at a meeting in Brussels about saving the Euro.

The picture is most prominently placed. Top line, perfectly centered, four columns wide. Story to the right. Angela is easily the most thoughtful looking person on earth. She might be saving the Euro, but she also might be doing any number of other things.

Figuring out NFL point spreads.
Who to call in from the bullpen.
Where to send the ball in after the timeout in NCAA Division I Women' basketball championship game.
Interrogating a suspect in place of Helen Mirren on 'Prime Suspect'.
Telling Frankie No at Rao's that her table is ready.
Considering an exacta bet at a study carrel during the Breeders' Cup.
Listening to budget cut proposals at a city council meeting regarding libraries.
As a judge, taking no truck with a showboating defense attorney.

She is easily the most important and thoughtful person on earth.

'Red On Red' is the title of the latest book by Edward Conlon, an active duty NYC detective who seems as at home with words as he might with police procedures. The book was published in April and is his second, after 'Blue Blood' of a few years ago.

'Red On Red' is a novel that is filled with delighfully simple poetic descriptions of people and places in NYC. My thoughts were to start to compile a list by highlighting the really good ones that I come across, but there are so many that I feel I would deface the book for someone else, even though I did buy it for myself.  The book is a looked-forward-to page turner before I reset the 3-way bulb to zero and hit the sheets.  Four hundred plus pages will last me a while

My surprise is that I haven't read a single book review.  I've yet to come across a passage with a car chase, gunfire, or doughnuts.  And I'm still entertained.  I like to think if the sequence of time were different, Frank McCourt would haul the book into his creative writing class at Stuyvesant High School and show the students what writing can be like.

Given my own familiarity with NYC, and the fact that the story takes place in NYC, I see everything that is described.  And I'm always sensitive to mistakes, typos, and bad facts, even though it's a novel.  None.  In fact, the book straightened out my confusion over Rosh Hashanah and Yom Kippur and which one involved bread and bridges.  A Catholic cop cleared it up.

Not all books hew so well to facts and descriptions. Someone in the publishing business fairly recently told an attentive room of people that there is no fact checking done in publishing. If a writer wants fact checking, they have to pay for it themselves.

This does seem like misplaced trust. It makes you wonder about anything Dick Cheney has written.

There's that word again: "iconoclast," being attached to the recently departed Al Davis.

You can start with the obituary that appeared in the NYT by Bruce Weber (pre-written it would seem since Bruce is peddling cross-country on a bike heading toward NY and hopefully kudos from Mayor Mike for shrinking his carbon footprint).

You will find words like "controversial," "renegade," "combative," and "irascible" in the piece.  A quote from Don Schula who called him "devious," and one from Dan Rooney that was much stronger: "a lying creep."

The sportswriter Dave Anderson always kept the adjective "sinister" embedded with nice words so often that Mr. Davis asked Mr. Anderson why did he always use the word "sinister."  Al complained that didn't Dave know his mother read the Times? But he didn't mind the word.

All you need to know about Al Davis can be gleaned from his formative surroundings. Born on the Fourth of July (like George Steinbrenner), 1929 and graduated from Erasmus Hall High School on Flatbush Avenue, in Brooklyn

Al may have found fame, notoriety and fortune on the West Coast, but the East Coast never left him.  He was a Lord of Flatbush, all about egg creams, potato knishes, Coney Island franks and of course leather jackets.  He was Brando on a chopper, not Brando in his ripped underwear.  Tooth picks were meant to be chewed. Maybe even swallowed.

His favorite symbol might well have been what he saw under his mom's kitchen sink: bottles with a skull and cross bones, signifying poison.  No safety caps in that era.

The theatrical producer Billy Rose was so disliked that when he died it was said no one came to the funeral, there was only the hearse.  A one car funeral.  As short as you can get. Not so for Al. All the adjectives seemed to fit, and he didn't seem to mind.  He induced heart attacks.

When there were court cases surrounding his proposed movement of the Oakland Raiders to Los Angeles, the owner of the San Diego Chargers, Eugene Klein, gave testimony against approving the move.  Klein was so infuriated with Davis his anger from the witness box induced a heart attack on the spot.

Eugene Klein survived, eventually sold the Chargers and became one of the most successful thoroughbred race horse owners of all time, winning multiple Breeders' Cup races and Eclipse awards.  He loved telling people how happy he was owning horses, who didn't demand contracts and negotiations. He recommended horses to anyone who wanted to own something to do with sports.

Owning horses didn't put you in a league with Al Davis.

http://www.onofframp.blogspot.com
Posted by John D. at 4:51 PM No comments:

One wouldn't think a pumpkin could mimic a human eating disorder, but there's no other way to describe pumpkins that overeat, then burst. The bulimic pumpkin. Charlie Brown's life can be fraught with enough peril without having a pumpkin go heaving on him in The Great Pumpkin Patch.

The story is really about people who grow outsized pumpkins with the goal of being the first to nurture one to the One Ton mark--2,000 pounds. They're apparently getting close to the gardening version of the sub four-minute mile.

Obsessive gardeners armed with champion seeds, lakes of enriched water, hormones, and plant surgery are well on their way to making something that's big, even bigger. Bragging rights, exclusive leather jackets, and a little prize money are all the incentives these people need to keep at it.

There are claims by some gardeners that they can even hear the pumkins grow.  And if true, that some of these planted mammouths can gain 50 pounds in a day, then who's to say the unaided ear might not hear something subdividing underneath that orange skin?  Sci-Fi week on Turner Movie Classics.

No weight loss programs for these fruits. Just the opposite: more is better. But, as with most things in life, there's nothing that can't be overdone.

One grower remembers coming back from church to find that his biggest pumpkin had exploded under the force of its own growth.

"There was a footlong crack through the rind. It just blew up."

What would Charlie Brown do? 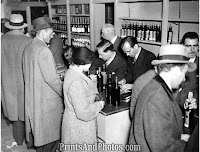 What on line meant just before Prohibition was enacted.
Posted by John D. at 4:44 PM No comments: