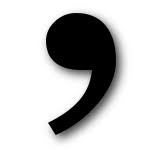 How do you pronounce an apostrophe anyway?

Sarah Lyall in her latest piece for the NYT almost poses that question. Her latest story is about the new Little Caesars Pizza arena in Detroit, home to the N.B.A. Pistons and the N.H.L. Red Wings.

Ms. Lyall correctly notes there is a missing apostrophe after the r and before the s in Little Caesars. A pesky English teacher, especially at an expensive school, would have your backpack in a shredder if you didn't know enough to write it as 'Little Caesar's Arena.' A less incensed teacher would probably not care.

Of course, any English teacher I had predated backpacks so their frustration at your not knowing where to put the elevated comma might involve slamming the chalk down on the tray of what was truly a blackboard. Black slate. White chalk. Mad teacher.

Go ahead, say 'Little Caesars Arena.' Did the missing apostrophe create a different pronunciation? Of course not.

Lynne Truss in her tongue-in-cheek primer on grammar and punctuation, 'Eats, Shoots and Leaves,' takes us on a journey through the minefield of punctuation. Fittingly, she dedicated her book 'to the memory of the striking Bolshevik printers of St Petersburg who, in 1905, demanded to be paid the same rate for punctuation marks as for letters, and thereby directly precipitated the first Russian Revolution."

(Since I doubt there are mistakes in Ms. Truss's book, I'm sure her omission of the period after St is not accidental. She's testing us.)

And since the apostrophe might be the most troubling of punctuation marks, Simon Griffin wrote a book titled with what Richard Burton called the greatest Anglo-Saxon word in the English language, 'Fucking Apostrophes.' And they are.

The elevated comma has been causing havoc ever since it first appeared in the 16th century to indicate omitted text. Its first purpose. More of course was put on its back, until it now scares you into indecision as to when you use it and where do you place it when there is a possessive noun, and worse, a plural possessive? Give me a beak. And if there a word ending in s...no one can live under that much pressure.

If horse racing's series of championship races were inaugurated today, the Breeders' Cup no doubt would be without that little guy sticking up there. It's a logo invader. But the Breeders' Cup was started in 1984, before cell phones hid the little bugger on another screen that you had to go to, and that of course just slows you down. And we can't have that.

The apostrophe has served as the copy editor's blackmail for too long. Correctly, the NYT headline over Ms. Lyall's story notes: At the Pistons' New Home, Empty Seats and Hockey Statues. Since Pistons is used in a plural possessive form, the apostrophes goes after the last s. Get it? Of course you do.

But editing layers are disappearing at the paper that has a motto of: "All the News That's Fit to Print." Will apostrophes start disappearing as well? Probably not with the current generation at the paper, but maybe when the next one gets employed who have grown accustomed to not looking for the pesky bugger on their cell phones.

Little Caesars Pizza is only the beginning.