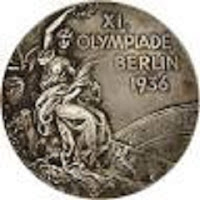 It wasn't until I read Jimmy Breslin's razor-thin book on Branch Rickey last year that I ever knew that Jackie Robinson had a older brother Matt ("McKenzie") Robinson who ran second behind Jesse Owens at the 1936 Olympics in the 200 meter dash, winning the silver medal. Thus, the United States didn't present the Fuhrer with only one black guy who beat everyone in an event, they presented the Fuhrer with two black guys who beat everyone. Talk about making someone madder.

Why it took until 2011 to read about this should itself be a story. Talk about no respect.

Aside from the Jesse Owens story line in the 1936 there was the substitution of the two American Jewish runners, Marty Glickman and Sam Stoller from the 100x4 relay team for Jesse Owens and Ralph Metcalfe, another black American who finished second to Owens in the 100 meter dash.

The explanation advanced for the substitution was always that Glickman and Stoller were pulled because Hitler asked the American team not to run any Jewish athletes. Apparently, in his mind, blacks winning was better than having Jews win.

Whether there is any basis to an alternate take on the episode will likely never really be known. It went that the USA team feared that the Germans hadn't yet used their best runners, and were waiting for the relay to show off their talent, thereby blowing the US out of the water, despite the US being favored before the substitution.

Thus, Owens and Metcalfe were substituted at the last minute in order to assure victory, despite not being originally scheduled to run the event, or even to have practiced baton passing, a key element, that if botched, leads to disqualification.

Because Glickman had a long broadcasting life in New York with the football Giants this part of the Owens episodes is usually told hand-in-glove with Jesse's achievements.

So, until PBS does an American Masters piece on Jesse Owens, I never knew there were two Jewish athletes removed from the relay team, for well-imagined reasons, and not until Jimmy Breslin writes about Branch Rickey and Jackie Robinson do I ever hear that Jackie's older brother was a fast guy himself and took home a silver medal, 0.04 seconds behind Jesse Owens.

Today we find her again in a usual spot, front page of major newspaper, in this case the Wall Street Journal, where she is seen with her new public companion Francois Hollande, the newly elected president of France.

She seems to be at a bit of cross-roads, directing the flow on the red carpet that she and Mr. Hollande find themselves on. Perhaps she is tutoring Francois on how to avoid Joan Rivers and daughter Melissa, who usually seem to pop-up whenever a red carpet appears.

The caption to the picture reads what you might expect, but adds that Chancellor Merkel is meeting the French President in Paris, despite Mr. Hollande's plane being delayed after being struck by lightning. The Rivers people deny they had anything to do with creating the lightning.

It would be historically inaccurate for the producers of 'Downton Abbey' to somehow work Chancellor Merkel into meeting Lord Granthan on the moors in the coming season. However, the Lord's mother-in-law, Shirley Maclaine, claims to have personally survived several lightning strikes in prior incarnations.

Perhaps Ol' Shirl can be fast-forwarded through the English countryside to a red carpet with Joan, Angela, and Angelina, the other woman who the Chancellor has usurped as the most photographed woman. Joan of course could supply that lightning.

http://www.onofframp.blogspot.com/
Posted by John D. at 6:13 PM No comments: 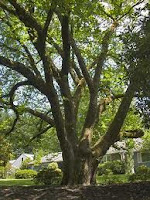 Tree warden. It's not an occupational title you hear of too often. At least in New York City. But they're there, just as the trees are there.

@Obitsman has Tweeted a reference to the ultimate fell-good story. A 103 year-old man, a former tree warden, is buried in a casket made from the 217 year-old elm tree that he was able to keep alive until about 2 years ago.

It's an AP story out of Maine, and printed in the Miami Herald. Miami, and Florida in general, have quite a share of retirees, and plenty from the northeast, so it's a natural human interest story.

But "tree warden," sounds like something from Dickens, and perhaps it is. No matter. What it is is a spark that ignites the memory of the "tombstone" story that appears on the front page of the May 6, 1912 edition of the New York Times that came as part of one of those Legacy/Ellis island things. Find a relative who came through Ellis Island, and the Times will package a reproduction of the Ellis Island record of the arrival, a picture, or drawing of the ship, and a reprint of the front page of the paper from the arrival day. It's nicely done, and not especially prohibitively expensive.

In my instance, I got a commemorative arrival of my grandfather, who at 30, was making his third trip from Greece in order to bring his 18 year-old brother over to join him.

All that family stuff aside, what is additionally interesting is how bluntly death can be reported in 1912. Not anyone I know, but there on the front page is the following story about a Massachusetts tree warden who didn't make it home alive for supper.

SHARON, MASS, May 5 - Thomas J.
Leary, the town tree warden, sat down
beneath a tree in East Roxboro street to-
night, and a moment later a terrific ex-
plosion blew him to pieces. A hole three
feet deep was made in the ground where
he had been sitting. The report of the ex-
plosion was heard for miles, and houses a
quarter of a mile away rocked danger-
ously.
The cause of the explosion is not def-
initely known, but the theory is that
Leary, who was a contractor, had a stick
of dynamite in his pocket, and that when
he sat down it came in contact with a
stone. Leary was 35 years old and un-
married.

I guess it will never be known if Leary was drinking at the time. I know my great-uncle never learned to read English, so it is unlikely he read this story on his arrival. I suspect my grandfather was also ignorant of it as well.

http://www.onofframp.blogspot.com/
Posted by John D. at 2:38 PM No comments:

If anyone thinks that just because Nicolas Sarkozy lost an election we're going to see less and less of Germany's Chancellor Angela Merkel obviously hasn't counted on her incredible photogenic durability.

The above picture appears in Tuesday's WSJ underneath that of the French victor, Francois Hollande. The picture, taken from an Internet site runs with a caption that reads: "Early attempt at Francois Hollande impersonation."

I don't get international TV, so I don't know if it is really a good impersonation or not.  But if the new French President does look like a version of a blowfish trying for punch line, then Angela, as always, has nailed it.

I expect she might be around longer than Arthur Godfrey. 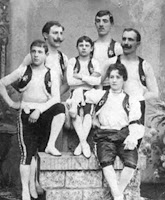 I don't what happens to others who might read that so-and-so is the seventh generational member of a family, but I immediately start wondering, "how far back does that go?"

I didn't read an answer, but I can make a good guess. The story just came out that Nik Wallenda, the seventh-generation circus performer has secured permission to do a wire act across Niagra Falls. It is scheduled for next month, June 15th.

Nik is now 33 and is no stranger to doing these things. His great-great grandfather was Karl Wallenda, who is where some people's memories of The Wallendas start. It was at least where mine started, when Karl, leading the family and extended family across a high wire doing their famous Seven Chair Pyramid walk in 1962, saw the front man topple, sending two of the act's members to their death, and paralyzing a third. I can still remember the newspaper picture. It looked like one of the most foolish, and impossible of things to do, but then again, if it didn't look that way, who would pay to see it?

Karl later fell to his death doing a wire act in Puerto Rico in 1978. We has 73. His great-great grandson Nik successfully completed that walk in 2011, doing it with his mother, Delilah. They are definitely a family who you're careful about being with if they ask you to take a stroll.

But seventh generation, puts the start where?

Without strenuous research, (like leave the Internet) the start has to be somewhere around 1800, or a little before. This lands the family, described as a "circus family", in Germany squarely around the time of Napoleon. I guess it could easily be speculated that someone in the family perhaps even entertained in front of Napoleon, or even Karl Marx somewhat after that.

Now the conquering will be to high-wire walk across Niagra Falls. Texting while walking reamins to be seen.

http://www.onofframp.blogspot.com/
Posted by John D. at 6:09 PM No comments: