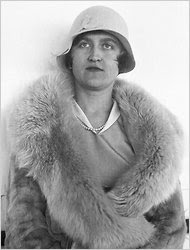 Imagine a woman whose father was born in 1839 and who likely told her of where he was when Lincoln was assasinated in 1865 when he himself was 26 years old, who up till Tuesday of this week could have possibly told us who she thought would be in the finals on 'American Idol' and 'Dancing with the Stars,' who has now herself suddenly passed away.

Where does the time go?

http://www.onofframp.blogspot.com/
Posted by John D. at 6:31 PM No comments:

I've always thought there was poetry in prose.  And when I come across it, I like to preserve it, commit it to memory.  It can make for some great pieces of conversation when brought up at the right time.  Image is everything. So is timing.

That fellow John Barlett surely thought along these same lines when he set out to compile his book of  'Familiar Quotations.'  There have been many editions of this book, and I distinctly remember a story a few years ago by the then-current editor on what criteria to use to keep adding to the book.  "Go ahead, make my day" is certainly not Shakespeare, but someone did write it, and someone did memorably say it.  Why not include it?

While that academic debate likely continues, I set out a few years ago to compile my own quotation book, containing phrases I read or heard that I thought were especially memorable, profund, sounded good, or just plain made me laugh.  Something is brought to mind.

I haven't been directly updating this "book" of mine much lately.  Russell Baker once wrote me that Commonplace books were hardly ever published. But he also at the same time sent me examples of what he was compilng.  I felt in good company.  And the blog has somewhat taken over for memorializing phrases.

An example of something I added to the 'Personal Book of Quotations' (everything needs a title) was the following:

Sleek, slinky creatures crowd the bar at Vandam. With a Darwinian instinct for social display, they perch on the tall stools and preen, agreeably conscious that they have chosen a flattering setting.
--Restaurant review, NYT, July 21, 1999

There may have been a picture, but I thought this was a great way of saying there were some very long-legged, attractive women hanging out at the bar.  You have to admit, it's a literary wolf-whistle. And then some.

The reaction to phrases continues, and I recently found one from what I would think might be considered a surprising source--James Balwin writing about boxing.  But there it is, in 'At the Fights,' an anthology of essays and stories from a wide variety of writers, all having something to say about boxing.  Mr. Baldwin's covers the first Floyd Patterson/Sonny Liston fight in 1962, held in Chicago.

Patterson's training camp scene is described.  But the poetry really sets in when Mr. Baldwin describes some of the entourage filling up the place:

"There were hangers-on and proteges, a singer somewhere around, whom I didn't meet, owned by Patterson, and another singer owned by someone else--who couldn't sing, everyone agreed, but who didn't have to, being so loaded with personality--and there were some improbable-looking women, turned out, it would seem, by a machine shop, who didn't seem, really, to walk or talk, but rather to gleam, click and glide..."

I date myself every day I wake up, but if anyone remembers Flip Wilson in the 1970s on his show doing his Geraldine imitation--the saucy lady who fresh-mouths the world--then you can remember seeing someone who "gleams, clicks and glides."

http://www.onofframp.blogspot.com/
Posted by John D. at 4:47 PM No comments:

The Urge to Pun

The urge to pun can be something many people engage in. In some people, it might also be an involuntary reflex, something they can no more control than their breathing. Their medulla just sends out an automatic reflex signal that when a certain combination of words or images presents itself, they have to chime in with something, no matter how silly, profound, annoying, or perhaps even vulgar it might be. And since vulgar can be subjective, I usually take few precautions into letting my 'pun-side' take over in expressing myself.  There is usually no one around, so I usually just wind up entertaining myself.  But, sometimes I feel the need to share.  Be prepared.

As previously mentioned, there is an entertaining book out about puns: 'The Pun Also Rises,' by John Pollack.  It gives the pun scholarly and poplular treatment.  Mr Pollack remarkably recounts that his own punning started at two and a half years old.  Perhaps that kind of genetic hard wiring helped him win a World Championship title at punning.  (Yes, there apparently is one; his title coming in 1995, at the O. Henry Pun-Off World Championships.)

But you don't have to be a punning prodigy to engage in the form.  As Mr. Pollack notes in his book, it's been going on since there were cave drawings.  Imagine that, as soon as mankind stood up, he did standup.

So, when @obitsman Tweets a reference to a legitimate news story coming out of Houston, well, the reflexes took over.

It seems a man in Houston took his neigbor to view something through a hole in his fence.  Through this hole, the neighbor pointed out what he had done with a chainsaw to another neighbor, who he claimed was stealing from him.

This of course can only be described as someone being lead "to look through a knot hole and seeing someone who was not whole."

I'm not aware of any treatment for this condition.

http://www.onofframp.blogspot.com/
Posted by John D. at 2:12 PM No comments: 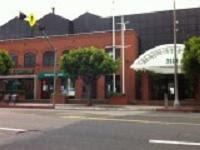 WHAT ARNOLD MAY HAVE HIDDEN HERE
He's already admitted to one extramarital affair -- and this building may have been the site of others.

This is one of those silly teasers that AOL and others throw out there to draw attention to something that is not really a story. This is a picture of Governor Schwarzenegger's Santa Monica office, where, it is speculated he hid things.

Of course he did.  He played 'hide the salami.'

Ultimately, all men are alike.  Side effects may vary, however.

http://www.onofframp.blogspot.com/
Posted by John D. at 7:57 PM No comments:

Catching Up With the Newspapers 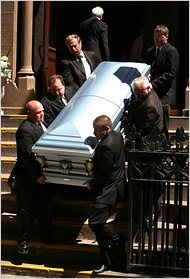 Writing you don't get a chance to read anywhere else.

Jim Dwyer, on the funeral of Jimmy McElroy, 66, who died in a California prison while serving a life sentence for activities with the Westies, the notorious Irish-American gang that ruled the West Side of Manhattan for a good while through the 1980s:

The start of the funeral mass at the Church of Holy Cross on West 42nd Street was delayed a bit for a ring ceremony to complete for the eighth graders.

"Jimmy McElroy had himself once been an eighth grader, but not a ninth grader. He dropped out of school to work..."

http://www.onofframp.blogspot.com/
Posted by John D. at 8:08 PM No comments:

All the News All the Time Repeated

Current employment circumstances have lately had me waking up in out-of-town hotel rooms, complete with multiple flat panel televisions and other niceties that help the stay become some fun.

When these instances present themselves, I always find myself giving in, just a bit, and watching early morning television.  I consider it absolutely amazing that I can tune in to all three major network shows at about the same time and hit a commercial on each one.  Everybody has a word from the sponsors

But when this subsides, just a bit, and I take in several days of this routine, I manage to absorb the news.  Slowly, and repeatedly.  This past week was revealing.

Every news show, network and cable, has someone standing in the flood-swollen Mississippi River, reporting that it's rising.

Osama bin Laden has been killed.

Henry Kissinger, hawking his forthcoming book On China, looks positively enbalmed next to the Today show's Natalie Morales decked out to the nines, looking better than anyone has a right to look that early in the morning. Sex sells, but Dr. K. needs more than Natalie can generate.

A Connecticut high school student has been banned from the prom because he posted an invitation to a girl on the side of the school using removable letters.  No permanent damage was done to the building.  This student has now appeared on more telecasts than President Obama.

It is hard to pick a jury for a murder trial for a defendent who is alleged to have killed her children/child.  Details are incomplete because I was in the shower about the same tiime every day.

Osama bin Laden has been killed.

Robin Meade, the anchor on Headline News, is as cute as ever, despite putting on what looks like a few avoirdupois since the last time I was in this position.  It took me two days to remember to start with that channel.

http://www.onofframp.blogspot.com/
Posted by John D. at 11:49 AM No comments: 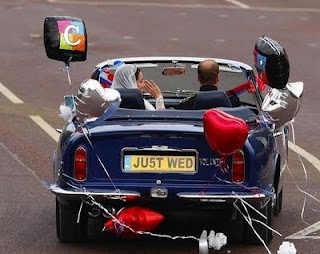 It's a great photo.  The royal couple tooling away with the top down in the groom's dad's car. It's festive, and the license plate says JUST WED.  How clever. No, wait! It clearly says JU5T WED.  It looks like 'JUST,' but isn't.

I've seen enough of public broadcasting and English shows to think that this is an example of what our across-the-pond cousins would call a "cock-up."  How do you explain the use of a number to replace a letter?  If it isn't a cock-up, then what is it?

Explanations abound.  The Royal Typographer got into the sherry a bit early.  Maybe by a full day.  Somoene else has JUST WED and they couldn't use the same plate.  Now come on.  The English monarchy can't buy a consonant for a day?  Thing ARE bad.

They have to use a number somewhere in the plate. Huh?  Unless Prince Philip reported the car stolen, it's unlikely it's a REAL plate. There's a real looking one on the front.

National health care in England is a complete disaster.  Eye exams take forever to schedule and the people at RDMV (Royal Department of Motor Vehicles) are last, anyway.

The IRA is somehow involved. '5' is code for something.  It's a Twitter handle. @JUSTWED was taken.  In fact, it is taken, and Jennifer Conroy hasn't posted anything yet. Come on Jennifer, you're clogging up the show.

http://www.onofframp.blogspot.com/
Posted by John D. at 3:16 PM No comments: