Rush to the Exit 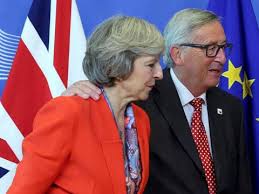 Perhaps the photo was inevitable. Seen above is Jean-Claude Juncker, the European Commission president, showing Britain's  Prime Minister Theresa May the way to the exit at  recent meeting in Brussels.

After an initial agreement on Friday, Brexit is being shown the exit. It's starting to get official.

Again, Prime Minister May does look well turned-out in her orange/red business suit. With this appearance in Brussels, Ms. May has once again pulled ahead of Germany's Chancellor Merkel for the title of  'World's Most Photographed Woman with Clothes On.'

Of the two women , Ms. May's position as leader of a European nation seems to be the most in jeopardy. Brexit talks, till now, haven't been going well, and there are those back on the Grand Isle who are growing impatient with her leadership.

If she pulls Bexit off, there is a good chance she'll get to stay on as prime minister and continue to be in the race with Chancellor Merkel for the title of... well, you know by now.