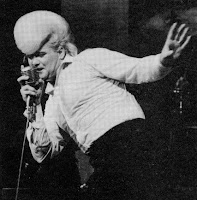 The 2012 movie 'Stand Up Guys' works hard for every part of its two and a half stars. In fact, two and a half might be generous by a half, but no real matter. If anything, the movie is worth watching because it is mercifully short, stars Al Pacino, Christopher Walken and Alan Arkin, who play a trio of now elderly heist artists who get together for one last score. Or it is one last score that's settled? It doesn't matter.

Desperate for something to watch last night since my DVR recordings have all been played out, I tried On Demand, the free on demand. It took a bit but I took a flyer on 'Stand Up Guys,' based on the cast.

The movie's redeeming quality is watching the three main actors act. Other than that, it's a fairly predictable plot that ends rather predictably. But on the way to killing time there are some extremely funny parts, and even one touching one late at night in a cemetery when there is a do-it-yourself burial.

There is one scene that you could build a whole trivia jackpot game on. Who is on the TV when Pacino and Walken surprise a gang of young wannabe wise guys yukking it up in their warehouse man cave?

Outnumbered, perhaps 5-2, Pacino and Walken (Arkin is the wheel man in the parked car) are interested in exacting a little revenge and teach a little respect to the youngsters for disrespecting a young woman named Sylvia. They were not particularly nice to Sylvia, and when the trio release her naked from the trunk of the sports car they just stole from the wannabes, it is plain to expect being outnumbered and geriatric will present no problem at all. Firearms and excellent aim help.

If I hadn't recently caught up with my newspapers and took in Wayne Cochran's obituary in Thursday's November 28th NYT I wouldn't have had a clue as to who was fleetingly seen on TV in that man cave before attention must be paid.

Wayne Cochran, who I feel a little ashamed to admit I never heard of, was considered the blue-eyed white soul singer who early in his career wrote and recorded  the teen classic 'Last Kiss'..."Where oh where can my baby be..." I never knew Pearl Jam covered the song, and I never knew Wayne's 'Goin' Back to Miami' was covered by 'The Blues Brothers' in the John Belushi, Dan Aykroyd movie of the same name.

For those who knew of Wayne Cochran, or took in the obit, then you know he performed with a enormous pompadour that eventually went silver. Seen above, Wayne's hair makes Trump's hair seem like yellow sage brush compared to the ski slope he sported on his head.

When I went to download a few of Wayne's numbers today from iTunes there was one of the songs he popularized, 'Get Down With It.' The song is only available on the album, and the album happens to be the soundtrack from 'Stand Up Guys.' We live on a Mobius strip.