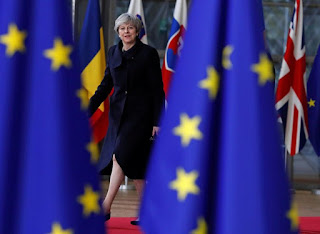 It is a great photo.

Peeking out through a forest of flags, Britain's Prime Minister Theresa May is seen in Brussels where major progress has been made with E.U. leaders on how Britain will accomplish their Brexit from the European Union.

It is a watershed moment, because until now there have been months of difficult diplomacy, which might now start bearing fruit.

Ms. May, as usual, looks natty in her wool coat, with a hint of knee peeking out from the under the hem line.

As we all know, Ms. May is locked in a battle with Germany's Chancellor Angela Merkel for the title of 'The World's Most Photographed Woman with Clothes On.'

This latest photo, appearing in Saturday's NYT, continues to keep Ms. May in the lead as the two leaders power their way down the stretch.