The Winner for the 4th Time 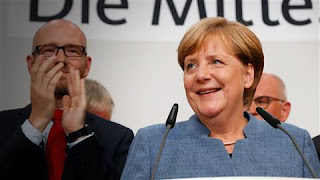 Germany's Chancellor Angela Merkel is in the news again, and of course that means her photo is hitting all the media outlets.

Ms. Merkel, you will remember, is locked in a battle with Britain's Prime Minister Theresa May for the title of the 'World's Most Photographed Woman with Clothes On.' For a while there it looked like Scotland's First Minister Nicola Sturgeon was going to challenge the top two contenders, but she's fallen way behind.

And then there was Jacinda Ardern, a candidate in New Zealand for prime minster. The election was just held there, and she didn't win. But since her party holds the second most seats in their government, we can expect Ms. Ardern to perhaps join the top two ladies in the race.

Seen below, Ms. Ardern looks very Theresa May as she heads for a meeting. She's 37, and is the youngest of the entrants. 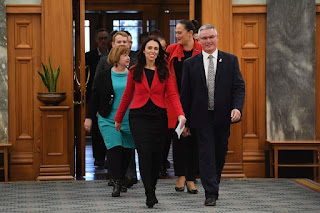 But for now, it is all Merkel. She just won her fourth four year term. There is some concern in Germany for her center party, with the far-right gaining a greater percentage of seats than expected. Immigration concerns plague the German leader.

We will have to see if we start to see a bit more of Theresa May now that summer is over. She's been busy over the Brexit terms and hasn't been seen much of in our news media. We hope she gets out soon. The sun doesn't seem to shine too much in Britain, so getting outdoors whenever you can is important.

And is important to be seen so that upstarts don't start to gain on the leaders.