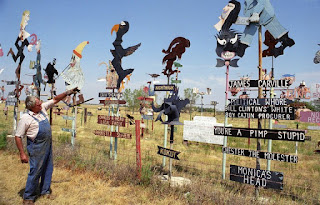 A crude form of poetry is often referred to as doggerel, defined formally as "burlesque verse in irregular rhythm...trivial pedestrian verse." It is not going to win any awards and its authorship is generally unknown.

One piece of doggerel that has stuck in in my mind is a rhyming quatrain of lines I remember reading when I was an adolescent that someone wrote on a bathroom's stall walls.

Some come here to sit and think
Others come to shit and stink.
But I come here to scratch my balls,
And read the bullshit on the walls,

Given that this piece of verse was probably constructed many years before someone scratched it on the stall's wall, it is doubtful that the originator of it was actually in the same stall I was. There are knock-offs everywhere in life. It was like a fake Bansky.

Bathroom verse used to be somewhat common, along with phone numbers, ostensibly from gay guys who could be called for sex. Or numbers of straight guys who had friends who were practical jokers who scrawled their friends' names on the walls. Get any funny calls from guys lately? I guess everything is online these days.

Another piece of verse, not at all raunchy, that has stuck in my mind, and surely countless others, is by a legitimate writer, the M.I.T. educated Gelet Burgess, who in 1895 wrote...

I never saw a purple cow,
I never hope to be one.
But I can tell you anyhow,
I'd rather see and than be one.

Great rhyme, probably introduced to a lot of us when we were children.

M.T. Liggett, 86, a folk artist who skewered politicians with wood and metal artwork has passed away in Wichita, Kansas. He lived his entire life in the rural farming community of Mullinville. His NYT obituary by Richard Sandomir is a good one in the print edition, but even better if you can take advantage of reading and seeing it online. There's video from a segment of a show on the History Channel, 'American Pickers.' There are more 'YouTube' segments that are a pure delight. The Wall Street Journal did an A-Hed piece on Mr. Liggett's art, and others in Kansas, somewhat of a cauldron for welded art.

Mr. Liggett was indeed a character, who created acres of metal and wood sculptures that were in effect political cartoons. He portrayed Hillary Clinton as having a swastika for a torso, and labelled her "Our Jack-Booted Eva Braun." This particular piece appears in a photo taken in 1997, when the Clintons were in the White House. It can be seen in the above photo at the extreme left. Hillary thinks people are tough on her now.

Then president Bill Clinton is portrayed as a bright red hog (Arkansas, remember/) with the label, "Razorback Draft Dodger." Mr. Liggett had been a career military men in the Air Force.

Not just Democrats. Mr. Liggett could be said not to like anyone who was elected, despite his own efforts to run for local offices, finishing last every time.  President George W. Bush was excoriated for ties to Big Oil. And the hits keep coming.

Mr. Liggett held many jobs and supported himself and his family in many ways. One of the occupations described is that of someone who "custom-cut wheat." No idea what this is. Is this where we get steel cut oatmeal from?

He was from a farming background. His parents were sharecroppers who were eventually able to buy the land they worked. He described himself as "poor, poor, poor." He recounted the story of being mocked in grammar school by the teacher when he drew a purple cow with the only crayon he had--purple, What a moron teacher. She never heard of a purple cow? Luckily for the world, his sensitivities to being mocked only temporarily discouraged him from creating art.

There are three photos accompanying Mr. Liggett's obituary. Two are credited to Terrence Moore, NYT, one showing Mr. Liggett's pieces, and the other showing a 50s/60s looking tail-finned Chrysler convertible parked on the shoulder of the rural road that runs past his place. The passenger door appears open. Someone is likely paying a visit to the acreage of wood and metal pieces. Mr. Liggett explains that he uses quarter inch iron to ensure that his pieces will outlive him by a wide margin. 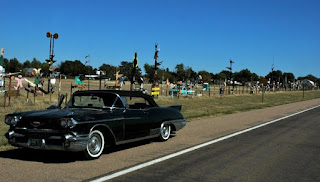 My guess is no one went out to Kansas to take recent photos of Mr. Liggett's outdoor spread.
This tells that perhaps the Times did an earlier piece on Mr. Liggett, when was alive. Bingo! They did.

'The Gospel According to the Grouch' is a May 4, 1997 piece that appeared in the Sunday magazine under the category labeled Art. The piece is not bylined, but it is a lively piece that incorporates a description of the man that would have been useful if it had been put into the obituary. There's even a quote by the subject that would have made a great ending.

Mr. Liggett is described as a "prairie philosopher, folk artist, supremely disgruntled citizen." His life's philosophy is summed up by...

"If you live your life worrying about what somebody's going to think, man, you might as well kill yourself right now. If you like me, fine. If you don't like me, that's still fine."

And what now might be a perfect sentiment in this age of Twitter and memorialized Tweets and video segments turned into news stories...

"A man is never remembered for words he did not say."