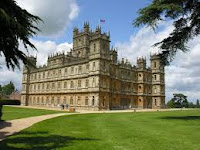 After being about a year and half behind the rest of the world, I've finally finished watching the final episode of 'Downton Abbey.' It of course ends on all happy notes, with everyone in the cast paired off like socks in a drawer with their already beloved, or soon-to-be beloved. It is happily every after, or at least until the future they don't foresee turns into WW II. They think they've seen change now, just wait.

Weddings. A staple of shows like Downton are two in number in separate episodes when Lady Mary finally realizes she loves Henry Talbot, despite his non-titled self. And Lady Edith, the somewhat plainest looking of all the sisters, who has had a child Marigold out of wedlock delivered undercover in Switzerland with her Aunt Rosamond riding shotgun, marries Bertie, the Marquess of Hexham. Edith thus becomes the Marchioness of Hexham, making her higher in rank to the rest of the Crawleys. A Marquess is lower than an Duke, but higher that an Earl, what her father Lord Grantham is. It now coyly gets pointed out that now Lady Mary has to curtsy to her sister. Yeah, right.

And speaking of Lady Mary, a character who provides a room with the as yet uninvented air conditioning, did anyone catch Michelle Dockery playing a parolee in 'Good Behavior' on TNT? I mean, an actress that can go from the plummy voice of British aristocracy to someone alone in a cheap U.S. motel room who makes a crack pipe out of light bulb and whose boyfriend is a Dark Web hired assassin, and makes you like her, is certainly a versatile actress. More Michelle.

If anyone things the Crawly estate is grand at Highclere mansion, pictured above, then they should see Bertie's pile in Hexham, Brancaster Castle. That place looks like where Prince John, as played by Claude Rains in the 1938 film 'Robin Hood,' is restricting Maid Marian's movements, at least until Robin Hood and his band of merry men come along and get her out of there and get Claude thrown in the dungeon. Life can sometimes be fair.

It now seems to be 1925, 13 years since the newspaper was delivered and ironed to dry the ink before being brought to his Lordship's grasp in the library. The paper then told of the sinking of the Titanic, and the affect it had on the peerage status of those left behind. Awful, simply awful.

From there we are treated to the lives and stories of the upstairs and downstairs inhabitants who go through all of life's joys and misery, unexpected deaths, births, marriages, affairs rape, homosexuality, theft, blackmail, the effects of WW I, jealousies and of course acts of human kindness. The upstairs crowd is certainly not all bad.

All is light-hearted and gay in the final episode. Lady Edith has confronted Bertie's stern mother and told her the truth about Marigold. The  courageous act has spun Lady Pelham sideways, but she hurdles the bad news of Edith's 'immorality' with the positive spin that Edith is not trying to gain Bertie's wealth and title "by deceit." Edith is after all a highly ethical person. The world in early 20th century England is surely "a changin.'"

The kitchen maid Daisy learns how to use an electric blow dryer, and gets a do coiffed by the helpful Anna that finally gets her reluctant love interest Andrew to notice her in a new light. Mrs. Patmore has beaten back the innuendos about her bed and breakfast being a "house of ill repute" when a guest stays there with his mistress and is later chased down for adultery. The Crawley family engage in damage control and an early form of public relations work when they visit Mrs. Patmore for tea and are photographed by the local paper as setting foot in the place..

Cousin Isobel and Lord Merton are next to walk down the aisle. His lordship learns from Dr. Clarkson, the Marcus Welby of 'Downton,' that those expensive Harley Street docs got the blood work wrong. His Lordship does have anemia, but not the deadly pernicious anemia, but rather iron deficiency anemia that can be treated with diet. This is great news for the actor playing his Lordship, since if they ever do an expected extension of 'Downton,' he will have a job.

Lady Cora's work as head of the hospital finally gets her husband's respect. Robert, the flexible fuddy-duddy takers a peek at Cora's presentation with the villagers and comes to the conclusion that his wife is worthy of the position and he better not fight her on it, She should however consider getting a different hat to wear. The headgear she favors could provide a nest for eagles.Their marriage steers clear of the rocks, if not bird nests.

Butler Charles Carson is developing "palsy" in his hands. Apparently it is hereditary, having been running in his family for generations. He can't be relied on to pour the claret without spilling it. He's beside himself.

A solution emerges that of course shows his Lordship's problem solving acumen. The man belongs settling conundrums at the highest levels of government. We of course remember Robert's help at the household when it was turned into a convalescent home for wounded soldiers during World War I. Robert grandly strutted around in his Boar War army uniform. The officer's leather belt and sash of course made him look like he was ready to invade Poland, or write speeding tickets on the New Jersey Turnpike. Robert was ahead of his time.

His Lordship suggests that Carson retire to a cottage on the estate and draw his pension, while Thomas Barrow, the under-butler who had to move on to a position at a household where he's being bored to tears to work in can step up and fill the vacancy. Barrow for Butler. It's All in the Family.

With Carson out to pasture he might learn how to cook and appreciate Mrs. Hughes's domestic skills better. He might become less of a chauvinist. With no television, he won't be ale to soak up Rachel Ray and start to whip up those TV meals, and learn how to fold clothes and reorganize a closet, but it will be a start. He is a good guy.

Tom Branson, the departed Lady Sybil's husband and former family chauffeur (Irishman to boot) has long since become a member of the family. His interest in cars and mechanical skills have provided him an opportunity to hook up with his brother-in-law Henry Talbot, a former race car driver and Mary's new husband, in an enterprise first selling used cars, with a new car dealership in the offing. Tom and Hank will soon become as big as Potamkin Cadillac.

And Mosely, the history buff who takes exams and becomes a teacher in the village school. His first day is not really good. He can't control the little darlings with dates, and seems to have walked into the same tough East End school that Sidney Poitier did in 'To Sire With Love.' Surely they're going to tie old Mosely to a chair in that classroom and set the place on fire. But like Sidney, he turns it around when he starts to explain his humble roots.

Joseph Mosely is all part of the general theme of the writers as they wind the show down. The characters are moving on. The grand English household filled with servants "in service" is in decline. Change is a comin'.

Mosely and one of the maids, Miss Baxter, are developing an easily seen fondness for each other. They will be another pair of socks in the sock drawer, and will certainly be around if the show becomes the expected sequel.

And Anna Bates, the valet's wife who has been through so much. Rape, miscarriage and married to John Bates, who was falsely accused of murdering his first wife, Anna has stood for the strength of women everywhere. She has stood by her man, and stood by when her water broke in Lady Mary's bedroom and audibly spilled on the carpeting.

Anna of course gives birth in Mary's bed just before midnight on New Year's Eve to a healthy boy, aided by the ever wise and ever awake Dr. Clarkson. By 1925 the United States has a personal income tax, and one wonders, if at that point, Inland Revenue operates the same way by allowing a personal deduction to be added if the birth is anytime before midnight, December 31. If so, the writer's have once again created an even happier ending because the Bates family gets an added deduction for someone born on the last day. Things are really going well at Downton these days.

Were Dear Abbey and Ann Landers really guys? No, they were twin sisters, but the female advice columnist on Lady Edith's publication is really Septimus Spratt, her grandmother's butler. Spratt has been leading a double life: tending to his domestic duties for the Dowager Countess of Grantham as well as writing pen name answers to women's question for advice to Lady Edith's London publication that she inherited from her relationship with Marigold's father, Michael Gregson.

Actually, Spratt has one more thing he does: fence with Gladys Denker, the maid who is Sylvester to his Tweety. Denker is always trying to get Spratt in trouble with Dame Violet, but it always backfires. When Dame Violet finds out through Denker that he is leading a double life she laughs as hysterical as an octogenarian can without keeling over, and tells Denker she is going to ask Spratt's advice on choosing her wardrobe next time. Spratt is really Liberace in livery.

Perhaps last, but by no means least is the Earl's mother, Lady Violet, played by Dame Maggie Smith. Throughout all the episodes she has had some of the best lines and the best pearls of wisdom you might expect from someone who was in attendance at Queen Victoria's Golden Jubilee in 1887. When asked by Cousin Isobel at Lady Sybil's wedding service why do the English behave the way they do, the Dowager Countess of Grantham chalked it up to the weather. Well, something gave them their stiff upper lips.

I am going to miss this bunch.