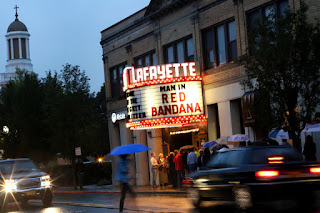 As someone who was in Tower One on 9/11, 29th floor, working for Empire BlueCross and BlueShield, I thought I'd heard, or seen all the 9/11 stories by now. I was wrong. I didn't know about the movie documentary produced by Mr. Matthew Weiss, 'Man in Red Bandana,'  until I read Corey Kilgannon's story in yesterday's NYT.

If today is 9/10, then tomorrow is 9/11, and the 16th anniversary of the World Trade Center, Pentagon attacks and the crash in Shanksville, Pennsylvania when the passengers took control of the hijacked jet and kept it from the target the terrorist were aiming it at. The dawn of large scale global terrorism.

9/11/2001 is not the only significant 9/11 date. I just followed a link someone sent me from a food festival they attended yesterday in Hell's Kitchen, or what is now more sedately called Clinton, a West Side section of Manhattan that used to be a rough and tumble neighborhood of Irish bars, warehouses, and tenement for the longshoremen and their families, close to the piers. It is now fully gentrified and ripe for 'once-upon-a-time' tours.

Turns out that on September 11, 1905 a  Sixth Avenue EL train that used the 9th Avenue EL tracks above 53rd Street, heading downtown, sped through a signal and switch, causing a derailment that sent the first car into a woman's apartment, and left the second car dangling from the EL tracks as if King Kong had come through the area and started tossing the toys around. 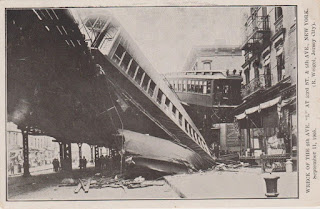 After we all met each other at a post-9/11 gathering the company held at a catering hall in Astoria, my manager, Vinnie LaBianca, who I came down the stairs with most of the way, commented that didn't I think all the firemen looked "glum." They did after all know more than we did, having started at the base of buildings, and were viewing what were really two horrific blazes that we had yet to see.

Mr. Kilgannon's story is an absolute heart-tugger. The person the documentary is about is Welles Crowther, 24, a volunteer fireman from Rockland County who wore a red bandana over his mouth to combat the dust as he led people to a staircase in Tower Two that lead then to another staircase and safety. He kept returning up the stairs to find other people until his DNA eventually proved he had died alongside other firemen when the tower collapsed.

The only service I attended after 9/11 was for my former director's brother-in-law, Richard Fitzsimons, who was working for Connor Security in the lobby, directing people out of Tower Two. He had only recently taken the job after retiring from the phone company. His brother Jack was a retired NYC detective who was my director's husband. Neither Jack or Pat were working at Empire at the time, and therefore were not in the building. Both have since passed away however.

There were services in Lynbrook, NY for Richard, even though there was as yet no evidence that he had died. A year or so later remains were found

I read all the 'Portraits of Grief' in the NYT.  I even knew one of the faces, then the name, from someone who occasionally sat next to me on the train ride into the city each morning on the Babylon line, David Grimner.

I was only fairly recently downtown and took a walk through the memorial area. I spotted Richard Fitzsimons's name without even looking for it. A little known memorial consists of everyone's name written on a heavy-duty tape and stuck to the tiles at the 16th Street exit of the 14th Street subway stop  at Union Square.

The names are getting a little beat up, but when I'm there I always look for Richie's name and those of Abe Zelmanowitz and Ed Beyea, a pair of people from Empire who died when Abe would not leave his co-worker Ed, who was in a wheelchair. They were in the process of getting down the stairs with a firemen's help, but not in enough time. The firemen who was helping them, William Burke, was a lifeguard captain at Jones Beach who my daughter worked with.

At the Astoria Manor House work reunion a priest addressed us and said there was no six degrees of separation now in effect for anyone in the city now. "Everyone is connected to someone." He was right.

After Mr. Kilgannon's piece I will now look for the name Welles Crowther. Apparently, immediately following 9/11,  Mr. Crowther's family only knew he perished in the collapse, they didn't know anything about his heroic, selfless efforts to get others to safety until they read a New York Times story on Memorial Day 2002 about an unnamed rescuer in a red bandana. It turns out their son kept that red bandana with him ever since his parents gave it to him when he was eight. Young Welles hung out with his father who was a volunteer at the Upper Nyack fire department. He eventually became an adult volunteer, who was interested in becoming a NYC firefighter. The story helped them identify their son's movements in Tower Two before he died.

Mr. Matthew Weiss is a lawyer and the film's producer, heard about the story from his banker, who was Welles's father, Jeff. Mr. Weiss took on the project of turning the story into a documentary film, taking six years to do it. The film has just been released.

Sometimes the lyrics of songs forever stay with me. Mary Chapin Carpenter has a homage to 9/11 in her song 'Grand Central Station.'  Never mind it's really Grand Central Terminal, poetic license. If anyone remembers post-9/11 Grand Central and Penn Station they will remember the sections of photos and clippings of the people who were commuters who passed away that day. It was a long time before anyone moved those memorials and put them somewhere else.

My own lyrical effort about 9/11 is a poem I publish annually in this blog on 9/16 tiled 'Septembers.' The first three stanzas are about 9/11, the last one about 9/16/2002, the day my manager, Vinnie LaBianca and my co-worker Isabel Munoz, also a 9/11 survivor, were executed by our vice president at our temporary location, 1440 Broadway at around 8:20 a.m. The vice president, John Harrison, then took his own life, saving everyone a trial.

An In Memoriam piece is placed every five years in the NYT. This Saturday the 15th anniversary of that fateful day will again be remembered.

Using song or poetry to acknowledge an event is an almost natural reaction. I emailed Mr. Weiss if he was aware of a Nanci Griffith's song, 'Davey's Last Picture.' He replied he wasn't, but he would check it out.

Ms. Griffith's song appears on her 2012 album 'Intersection' and was co-written by Nanci. I have no idea who the song is about, or if it a generic 9/11 lyric.

Little boy spots a fire  truck,
Mom can we stop,
That's what I want to do
When I grow up.

There were a lot of  little boys who became men who died that day.