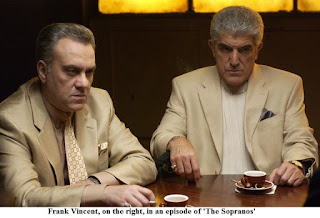 If the name Frank Vincent doesn't conjure up a face, then the face certainly will conjure up a wise guy who has inhabited several modern gangster films. Frank had a face made for an indictment.

I never really watched the 'Sopranos', so I wasn't aware that Mr. Vincent had made his way into that TV series as, what else, a wise guy. One look at that kisser and head of slicked back grey/white hair and you knew you were in trouble if he was mad at you. And in several movies he was very mad. When people wound up dead, or plopped into shallow desert graves. Frank's character was behind it.

In fact, I saw enough movies where Mr. Vincent's character offed someone that I feared for my own life when I saw him, even if it was only on the small screen. He was a most menacing figure.

Even in the cop movie 'Cop Land', where he plays a police union official, we are introduced to his character where he spends his quality time: at a grave, in this case a burial in a cemetery, rather than a plot dug in the middle of the night with a borrowed shovel.

It seems the director Martin Scorsese saw Frank and Joe Pesci in a movie, 'The Death Collector', and immediately used both of them in 'Raging Bull.' Mr. Vincent was part of the stable of actors who lived as gangster goombas in his films.

No one could look bad look more authentic than Mr. Vincent wearing a pinky ring, drinking espresso in a social club, sporting a pocket square and wearing a piece of gold jewelry around their neck. He was born for the parts.

Mr. Vincent was a actor, who has now passed away at 80. Somewhat amazingly, his NYT obit appears right next to another actor, Gastone Moschin, 88, who memorably played Don Fanucci, who as a Black Hand boss, controlled his Little Italy neighborhood, at least until the young Vito Corleone, as played by a young Robert De Niro, puts a violent end to his shakedowns and influence. Vito is well on his way up the Mafia ladder.

But Mr. Vincent is just playing those roles. He started out as a drummer, even playing with Joe Pesci, who played guitar. They even once had a comedy act, proving that mobsters really can make you laugh.

Apparently Mr. Vincent appeared in 30 'Sopranos' episodes, after initially being bypassed for a part in that series. Perhaps fittingly or not, Mr. Vincent passed away in New Jersey, at an undisclosed location.