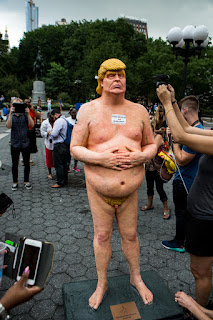 STD stands for "sexually transmitted disease" which of course can be spread through social interactions. Social media, on the other hand, is spread through computers. No pharmaceutical cures needed.

There may be those who remember the fellow who placed a TRUMP tombstone in Central Park as a form of protest, or commentary, on 'The Donald's' run for higher office, the highest office in the land: the presidency. This occurred this year in early spring. The placing gained significant media attention. Reporters sought explanations as to who placed it there.

Mr. Michael Wilson, of the NYT reported on his findings, and declared the mystery solved. He reported in his 'Crime Scene' column on May 9th the identity of the person who had the tombstone made, and who engraved it. Even the estimated cost of the prank, which ran into the several thousand dollars. Great press. Great story.

Mr. Wilson will answer his emails, and when I inquired as to what the perpetrator, Brain Whiteley, the 33 year-old artist would be charged with, he replied that no one had that information yet.

We know what the 19 year-old Trump Tower building climber Stephen Rogata, is being charged with, and how it's gained him a stay in the psych ward in Bellevue, but what  about the tombstone placement? Surely there's something on the books that the artist can be charged with, even if it carries a penalty no greater than spitting on the sidewalk, which is a violation.

Not much about the tombstone story has appeared lately. I would venture to say it died, and perhaps it really has. It has certainly been replaced by what you might call the 'Trump Edifice Complex' where there are those motivated to leave a remnant of his legacy, or in the latest case, a life-side naked statue of Donald Trump in Union Square Park, depicting the Republican candidate without the Greek word for grapes, "orchi." The Democratic candidate doesn't have them either. But in her case it is an anatomical characteristic of females.

The Trump statue, like most artwork, has a title: 'The Emperor Has No Balls.' Apparently there are similar statues placed in other American cities which will lead other parks' department spokespersons the chance to top the zero-tolerance policy statement uttered by Sam Biederman, of NYC Parks.

My attention to all this was initiated by social media, coming from a Tweet by Pia Catton (@PiaCatton), who in turn retweeted Slade Sohmer (@Slade) who links his tweet to a Gothamist story that carries multiple views of the naked Trump statue from various angles, even showing it being trucked away, gluteus maximus up.

Mr. Biederman, identified as a spokesperson for NYC Parks is quoted as saying: "NYC Parks stands firmly against any unpermitted erection in the city parks, no matter how small."

I really don't know if the writer of the story is inventing Sam Biederman and the quote, or if indeed there is someone who actually said that in front of someone with a cellphone set to record.

Anyone with a decent memory should remember when NYC allowed statues of naked men to be placed in public spaces, even notably on a setback of the Empire State building, prompting people to think someone was ready to jump. This was written about in a prior posting and also by this writer in a letter to the New York Daily News, which did publish the letter, where I felt the naked statues were in poor taste. I also explained that passing the statues daily on my way to work by Madison Square Park I was always being reminded to make an appointment with a urologist.

The Gothamist story closes with what should be on all tourist brochures: New York is the best city on earth, and don't you forget it.