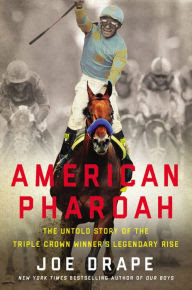 A book signing by the New York Times sports reporter Joe Drape was held last week at the Northshire book store in Saratoga Springs, on Broadway. It was a well-attended presentation, that Travers Week and the Saratoga Springs locale contributed to. Oh, and it was on a Tuesday, when the track is closed, the so called 'Dark Day,' the perfect day to hold a book signing at 5 PM. No races were being run in the neighborhood that anyone was missing.

I often wonder about what hidden metaphors might be at work, especially when the area of the book store devoted to the presentation was carved out of the Children's section. Some might think this a perfect spot from which to appeal to the childlike fantasies of the horseplayer. For surely, we are a group that thrive on fantasies, usually involving what we are going to do with the dough we will surely make by the end of the betting card.

I found myself on an aisle seat where when I scanned the shelves I found out that the New York Daily News sports reporter Mike Lupica has written numerous young adult sports books. Over 10. And recently. Who knew? Given the direction of that paper's attention to bylined sports reporting, Mike is smart to earn money from something other than newspaper sources.

Aside from being introduced by the Northshire lady, Mr. Drape was easy to recognize. He looks like his picture on Twitter and the back jacket flap of his latest book, American Pharoah, The Untold Story of the Triple Crown Winner's Legendary Rise, a subtitle long enough to be a margin of victory.

When Joe prefaced his remarks with stating that he's been to 113 tracks in 19 countries, it was easy to understand why he was amongst us dressed in jeans and an untucked dress shirt. The only prop missing from the horseplayer's dress code was a rolled up program or past performances sticking out of his back pocket. But, I did say it was the Dark Day, so no accompanying reference material was needed.

A New York wiseguy asked Mr. Drape if he felt that perhaps NYRA's track announcer Tom Durkin was responsible for the dearth of Triple Crown winners, with American Pharoah achieving the hat trick after 37 fallow years and the year after Durkin retired from announcing. Larry Collmus walked into the job and hit the Triple Crown call his first year at a NYRA track. Go figure.

Of course this was meant in jest, but it did get Mr. Drape to tell a Durkin story that was probably true. Tom Durkin was so upset that yet another Triple Crown bid had been thwarted when in 2004 Smarty Jones was caught "in the shadow of the wire" by Birdstone, that he flung his headset off in frustration at yet again not witnessing a Triple Crown. And there were even more frustrations to follow through the years. You can look it up.

Joe gave a quick highlight of American Pharoah's background and how right from the beginning there were veteran horse people who were impressed by his growth and increasing ability. American Pharoah put weight on after the Derby, and then again after the Preakness, when most winners between those races would lose a fair amount of weight. So, going into the Belmont, he was a fit horse.

Safety, drug issues, and declining interest in the sport were all topics on people's minds and Mr. Drape did his best to either answer the questions, or assure the audience that there was still plenty of life left in the game.

When someone asked why the NYT did not even have a story in the paper after Song Bird's Alabama success, Joe explained that in today's readership climate, with competing sports reporting platforms, there just wasn't that much "thirst" for reading about horse racing. He even assumed that he would be the last sports writer at the Times who would be devoted to horse racing. After him, the job won't be filled.

And this is not a brag that the mold will be broken after Mr.Drape's tenure on earth and at the Times comes to the finish line. It is a fair realization of the erosion of interest. I can remember when the paper covered racing to the extent that entries were listed, results and prices were published daily, and full Daily Racing Form charts were supplied in the paper. A sports page of today does not resemble a sports page of even 20 years ago, never mind 50 or more.

But then there's Saratoga. The Vatican, as Mr. Drape rightly states, but where there's a new pope almost every year, male or female, four legs or two. There's been racing there since the Civil War. It is called continuity. Red Smith, a now deceased sports writer for the Times, stated that you, "turn left on Union Avenue--go back 100 years." Brigadoon.

Two-year olds turn into three-year olds and they in turn turn into older horses. When the calendar changes, everyone is a year older and there is renewal in the ranks.

I always buy next year's calendar when I'm at Northshire. I'm now looking at 2017 waiting to be placed in the kitchen. I asked the likewise older fellow at the cash register, "how high do the numbers go?" It took a bit, but he got what I meant. They just keep going. Like the horses. Like Saratoga.