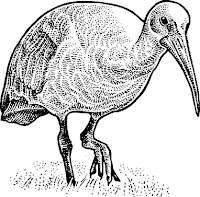 Any self-respecting scamp I ever grew up with always knew the parody words to the ditty 'Home on the Range.'

O give me a home where the buffalo roam...
And I'll show you a home full of (add favorite word for excrement. Ours was always shit.)

Very unlikely anyone could possibly have buffalo actually roaming in their home. As big a home as Ted Turner might have in Montana, my guess is he holds the line at having buffalo roam in the home.  I'm sure Jane Fonda moved out for other reasons. (Or maybe Ted did have buffalo roaming in the home.) I mean buffalo are an endangered species, and quite large. Their waste material must in turn also be prodigious.

But how about birds? Wild birds?

Turns out in South Africa, Johannesburg, JoBurg, there is a variety of wild bird that is a descendant of prehistoric birds, who somewhat fill sections of the city, poop where they want, and make an awful sound that goes somewhat like: "HA, HA-dee-DAW." This sounds like dialog from a Laurel and Hardy movie.

The bird is almost named after its sound, Hadeda ibis. The bird is liked and disliked. There are those of course who take to feeding the birds, sometimes with gourmet bird food they prepare themselves. This attracts the birds, and also adds to the din. Neighbors complain. It sounds like it would not be nice to live near a Hadeda ibis lover. People have moved away.

The WSJ A-Hed piece gives us the lowdown on these birds, how they came to be where they are in the numbers they are, and what their effect is on the citizens of Johannesburg.

It is highly doubtful I'll ever get to Johanesburg, and highly doubtful I'll ever be invited into someone's home. But if I ever were to, I'd have to decline an invitation from the lady in Joburg
who prepares a mixture of bird food based on what she feeds her dog, and allows the birds to waddle into her living room, where they love to look at themselves in the mirror and poop on her Persian rugs. She says they're "spoiled."

I'm sorry I can't make it Ms. Mauchle. Prior commitments.