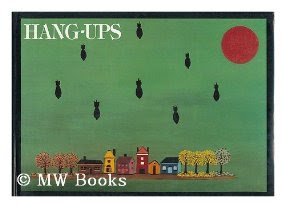 The New York Times has really adopted a changed obituary policy in that they now fairly regularly put the passing of someone on their front page. In today's paper there are two faces pictured, with captions and leads to the full text. The trifecta has yet to happen.

Since both pictures are black and white, the subjects are fairly old. In this case, both were octogenarians, with Jonathan Winters passing away at 87, and a famous ballerina, Maria Tallchief, at 88.

To me, Jonathan Winters is the more well-known. I know next to zero about ballet, other than knowing a few names. Ms. Tallchief, despite her considerable fame and famous marriage, remains a complete unknown to me until today. I'll catch up.

Jonathan Winters, on the other hand, was always generating laughs for me whenever I saw him appear anywhere, which in my case was always on television and in movies. I imitated him imitating others. My own favorite riff is to suddenly work it into a conversation, if it hasn't already been part of one, that, "I have hair, alllllllllllllllllll over my bodddyyyyyyyyyyyy." Since Jonathan's comet tail has flared out, no one knows what the hell I'm talking about unless they're on a Senior Citizen Center bus. It doesn't bother me.

My own favorite nugget of knowledge about Jonathan is right next to me, his book of paintings, 'Hang-Ups.' Oddly, his art career and interests are mentioned in the obituary, but not the book.

It was published by Random House in 1988, and is a collection of color plates of his work, with titles and blurb on the facing pages. I first saw the book in a Denver airport bookstore during a flight delay in December 1988. For some reason I didn't buy it then, but did always remember it. I later did buy it, but is was many years later.

There are a few Salvatore Dali influenced looking abstracts, but there others that are not quite as challenging to grasp. The cover of the book is his very arresting painting of several black balloon-like bombs coming down on a picturesque village, with a red sun in the upper right corner. The plate appears as the last painting in the book and is titled 'The First and Last Day of Spring.' The blurb goes as follows:

It's spring. And there are all these little homes and buildings and greenery and innocence.  And everyone is thinking it's just another day. And it's not. War rains terror. And if we continue to fight wars, it really will be the first and last day of spring.

The sentiment is nothing new, or nothing that hasn't been said in tons of ways. But the day Jonathan Winters is featured on the front page of the New York Times there is a picture of North Koreans riding up an escalator and looking at the floral display to their left. In amongst the display, incongruously for what the caption says is a 'flower show', are mock-ups of missiles, a white trumpet blowing soldier, and a military star. Sort of a miniature May Day parade at the Bronx Botanical Garden's Enid Haupt Conservatory.

We can only imagine what routine Jonathan might have launched into if he had seen that.