A Day at Belmont 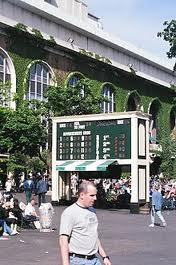 It is not a regular occurrence, but it is aimed for: a gathering of five guys who are linked by the same previous employer and who also enjoy trying to turn thoroughbred horse selections into bets that reward the bettor with a return on their investment.  This can be also be described as the practice of equine prophesy, but to call it what it is--playing the horses--is okay too.

Sometimes the financial reward eludes some, or all of those gathered, but since the meeting takes place in Belmont's dining room, even a losing day is not endured on an empty stomach.

Mostly the conversation is about what horses in the next race represent the best chance to cash a bet. Sometimes memory lane is gone down. One highlight from the past was someone's remembrance of the two cent cost of an item I won't disclose, other than to say it's always played heavily in the lives of young men becoming men.

Every member of the group represents a story, but only one represents a new found presence on YouTube and a call from 'America's Got Talent' to see if that applied to them. To some extent it must have, since their audition got them to progressive levels upward, and a taped segment of their performance. Airing it has probably been answered with a 'no' but what got them that far can be found at 'mrhumantrumpet' on YouTube.

This same member is the one who a year ago bet the right exacta numbers in the wrong race at the wrong track and still came home a hefty winner using that approach.

This time they remained fairly focused, and were rewarded with a $184 exacta for a $2 bet that was placed the correct way. Sometimes this works as well.

Subsequent to this they asked for a lead into what the future might hold in the next race. When another member of the group revealed their choice as an entry number, it was met with a comment that the horse hadn't run on the turf yet, and this was a turf race.

Puzzled, the advice giver pointed out that they were now looking toward the 7th race, not the 8th race. This put both members of the group on the same page, but did remove the luckier of the two away from a proven technique of betting the wrong race and being rewarded anyway.

The lesson learned from this is that anyone sitting next to a winner of a $184 exacta shouldn't be telling that person anything.