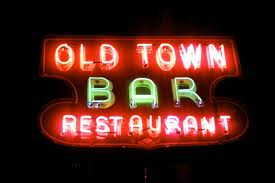 Darlene, where have you been all my life?

Actually, I know the answer to that question. Darlene was born in 1971, so I had already lived significant portions of my life and voted in presidential elections even before her mother was cruising down the diaper aisle at the supermarket.

Plus, Darlene is a fictional character in now what are two Peter De Jonge books. The first was 'Shadows Still Remain,' and had me as soon as one of the characters is walking west on 52nd Street, going past buildings I know about.

There is even a passage in the first book where Darlene and her partner, Serge Krekorian, are spending quality time in a booth at the Old Time Bar, a landmark establishment on 18th Street, still serving, and where I once delivered laundry to over 50 years ago.

The second De Jonge book, 'Buried on Avenue B,' has just been started. And again, I'm right there with Darlene as she gets her workday started at 8:00 A.M. in a joint named Milano's with her vodka, grapefruit eye-opener.

I finally hit on a series of books I love. Spy, true crime, fictional crime, seems to be where I like to go. But the locales so far, for me, haven't been New York City. Pre-war and post-war Europe, LA, Panama, even Chechnya. Outside of reading a fictionalized account of solving what happened to Judge Crater, and how the Mad Bomber case was solved, nothing has been Streets I Have Walked. Until Darlene.

And she's contemporary. She remembers what rock songs were being played when certain things were happening, and she drinks fluids with a straw. She couldn't live without cup holders. Our relationship was cemented early in the second book when she refers to people in bars with iPhones and instant access to trivia answers as 'dipshits.' I've never seen that word spelled out. It's a great word. It's also been awhile since I ever heard the word. And coming from someone who perfectly fits the marketing demographic of an iPhone user, you know Darlene is special.

Mr. De Jonge apparently apprenticed co-authoring, with credit, some James Patterson works. Now he's roaming about the city with his own developed stories, helped in no small part by contacts within the New York City Police Department. Help he fully acknowledges that has even been the back story to his main character's development. A female homicide detective, Donna Torres, is gratefully acknowledged, and by last accounts, is still on the force.

Detective O'Hara is portrayed as the expected fictional detective loaner, five-foot-four, freckles, red hair, and not at all looking like an ugly redheaded step-child. Apparently, there's a decent shape and working furnace underneath the generic, baggy civilian clothes she goes around in, that at least in the first book finds its way into helping an assistant medical examiner smile. And Darlene, of course.

It's interesting from my perspective to remember when woman were first introduced in number into the police department, sometime in the 60s. The hue and cry was that a woman would put their male partners in danger in patrol cars because they were too small. They wouldn't be able to help during an altercation. Police wives were vocal about this.

Fifty years does not make history ancient, but it is a slice of time that certainly some can't remember. But now we can have female Detective Torres helping a writer create a very believable female Detective O'Hara, and facing a city that never lets you down. Her hangovers allow her to move just fast enough.

Mr. De Jonge has created a franchise detective. Will she be exported to the British like we took in Inspector Morse? Certainly the visual media awaits. Will she get her own show here in the States?

The second book has really just come out, end of 2012, so Mr. De Jonge certainly has miles and miles to go with Darlene. She's only thirty-four at the time of the first book, and because of a very early pregnancy that makes her son now old enough to be a college student, she will likely have no more children. I look forward to following her no matter where Peter puts her. It is bound to be good.

There is one place I expect Darlene will never be. Management.