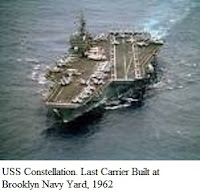 I'm not one to read many novels. Mysteries, true crime and and spy stories, some fiction, some non-fiction are generally the Sandman.

But I do read the book reviews, so I do read about novels, and one caught my attention, Jennifer Egan's 'Manhattan Beach,' a WW II story with a Brooklyn Navy Yard backdrop centered on a female hard helmet diver, Anna Kerrigan. Anna may not crack the corporate glass ceiling, but she does crack the gender gap below the water's surface.

For me, the Brooklyn Navy backdrop was the hook. My father worked as a civilian engineer in the Design Division at the Yard after the war, and until the Yard closed in 1964. After that, he stayed as a government employee in the Department of Navy, working in Washington D.C., bound to a desk that didn't overlook water, and where nothing visible was getting built.

But in the 50s I was taken to the Yard on a few occasions to watch ship launchings. I don't remember the ship President Eisenhower's wife Mamie christened, but she did have to whack the champagne bottle several times before it broke on the ship's hull, just like the multiple times Margaret Truman needed to christen the USS Missouri, a wartime battleship ship built at the Yard, as described in Ms. Egan's book.

Apparently Ms. Egan spent four years doing background research before she produced the book. The reader is treated to a detailed map of the Yard on the inside of the hard covers. I couldn't identify the building my father worked in because I don't remember its location within the Yard, and don't know its number.

I was never in the Design Division building, but I did get a bit of a childhood tour, seeing the huge crane, described as a 'hammer head' that I remember had huge lettering on it that said 'Safety First.' I remember a scoreboard of sorts that reported the number of consecutive days the Yard had gone without a serious accident.

It was because of the memory of that scoreboard that I once wrote to the MTA and suggested they adopt a similar scoreboard, publicly displayed in Penn Station, on the number of consecutive days all the escalators were working. I sarcastically challenged them to hit double digits. They replied, but didn't adopt the suggestion.

On a particular visit I did get a thrill riding on the huge platform elevator used on an aircraft carrier under construction that was going to be used to transfer the planes from the hanger deck to the flight deck. The hanger deck and the flight decks were immense flat spaces that seemed capable of swallowing football fields.

The Sands Street gate gets mentioned a number of times in the book. That was where I had to go a few times to deliver my father's photo id card to the Marines at the gate. On a few occasions my father went to work without his id. I never understood this, but they let him in without it, but were not going to let him out until his card was delivered to the gate.

Marines, then and now, are outfitted in the greatest looking uniforms ever. They are walking recruitment posters. But for some reason, their uniform never induced me to try and enlist in the Marines. The Navy was for me, but I wasn't taken by anyone. 4-F.

There are tender moments in the book, but perhaps the best one to me is expressed by Anna's Aunt Brianne, her father's sister, who at a certain juncture in Anna's life tells her, "if wishing could make men die, there'd be nary a one left." In certain contexts I've told people "all men are alike; but the side effects vary."

Ms. Egan's research has conveyed the Yard's atmosphere. I almost feel what air my parents were breathing, even though they were both outside of New York at the time and in the Army. Unless you grew up even in that postwar era, I don't think you can imagine the pride that existed that warships were being built within the city limits--and huge ones at that. The Yard was a huge part of the Brooklyn economy.

Outside the walls of the Yard bars and other recreational spots, bowling alleys and pool halls, did a booming trade. A good friend of mine, slightly older than myself, remembers his father's bar on Court Street, not adjacent to the Yard, but close enough to get the rowdy clientele that filled the place on payday. My friend John has distinct memories of guys sent flying through the front door onto the pavement. Management and other patrons provided the propulsion.

The nuclear era changed that, and the Yard was mainly relegated to building smaller LSTs, landing ship transports, and doing repair jobs. The Secretary of Defense Robert S. McNamara ordered the Yard closed in 1964, and my father's life and my life changed forever, not the same way Anna's life changed because of the Yard, but changed nonetheless. The place was our life as well.

I think Ms. Egan's book is promoted as historical fiction, with a bit of mystery woven it. Given the advance notice from the book reviews that a mystery is involved, you do guess fairly easily what the mystery is. Until you're wrong.