Power of the Press 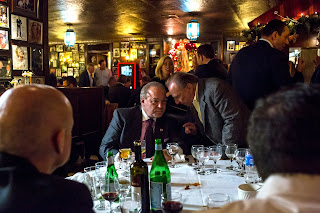 There are three photos that accompany today's print NYT story on Bo Dietl, the former NYC detective, head of his own security firm, and radio personality who recently finished 6th out of 7 candidates in the recent mayoral race, won by an acknowledged nemesis, Bill de Blasio, the 6' 5" incumbent who Bo gleefully calls 'Big Bird.' Bo didn't even get close enough to demand a recount if he were to win.

The story courts Bo in his element: his Thursday table at Rao's, that Uptown, East Harlem Italian eatery that is still just as hard to get a table at, despite the recent passing of its co-owner, Frank Pellegrino, famously known as 'Frankie No,' "no" being his legendary and consistent response to anyone who called for reservations.  The place is always packed enough. Who needs people you don't know?

I've never been to Rao's. The closest I've ever come is to be on either the northbound or southbound lanes of the FDR Drive, crawling by its 114th Street crossstreet, or having an Italian meal at my daughter's who buys Rao's sauce. The sauce is good.

"Keep my name out of the paper." The ultimate powerful person. One who can be seen, even photographed, but one who you don't know the name of. There are a lot of people whose names you will never know.

There is one caption accompanying the three pictures in today's print version of the paper. All three have Bo Dietl in them, and he is easily identified. You don't get to run for mayor by being an anonymous phone bidder calling Christie's in an attempt to latch onto a Leonardo.

The top left photo in the print edition identifies the woman who we see from the back and who is seen touching Bo's back. The photo to the right, while not identified, is easily Bo, sitting outside making a cell phone call. The third, and by far the largest of the photos, (seen above) shows a head-on shot of Bo at his table for 10 by the door (table #1), lending a cocked ear to a
60-ish, well dressed gentleman who is standing, leaning in, touching the table with his left hand and making a quiet point with his right hand while making some sort of conversation. The man is not identified, but he bears a striking resemblance to the actor Joe Viterelli (now deceased) who played Jelly in many a De Niro mob-themed movie.

The conversation easily doesn't have to be conspiratorial. He could be reminding Bo that he knew Joe Girardi would not be coming back as the skipper for the Yankees next season. It might also be about something else. Only a very few know.

A now deceased NYC political reporter, Milton Lewis, would tell of purported lobbyists, or advertised "fixers" who promised their clients they could talk to the mayor about something on their behalf and the mayor would listen and say, "yes."

When City Hall was more accessible, these "lobbyists" would bring their client with them into the rotunda area of City Hall, and when the mayor was spotted they would rush over to him and ask if he thought the Yankees were going to win the pennant this year. This was the era when the Yankees always won the pennant, so the mayor was always shaking his head yes. There are lots of ways to make money in this world, and being a "lobbyist" has always been one of them.

But who is the guy in the picture with Bo? There are things no one needs to know. Life will go on.