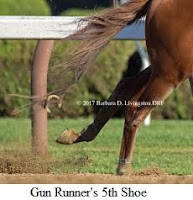 Or, How I learned to Stop Handicapping, Pick a Race, Play It and Come Out Ahead.

I've been handicapping and playing the Breeders' Cup races since their inception in 1984, when Harvey Pack and Pete Axthelm took television viewers on a trip through the Subway Special to Aqueduct.

The first set of races were held at California's Hollywood Park, but the handicapping pair opened the first televised show of the races with a trip down the subway stairs near the Port Authority, through the iron horseshoe Good Luck Arch that the Transit Authority had stuck on the platform and onto one of the oldest set of subway cars you ever saw that comprised the Subway Special.

If a token then was 90 cents, the Subway Special token was an eye-popping $1.50. It was a special token as well. But it was a special train, making one stop in Brooklyn at Hoyt Schermerhorn Street before arriving in Queens alongside Aqueduct Race Track. For some reason passengers thought they could smoke on this train, even though there was, and still is a NO SMOKING rule in effect on all subways and platforms, even outdoor ones. No sooner did some get on the train, open their Morning Telegraphs, or whatever, and light up.

No Roman numerals to tell us how many Breeders' Cup races there have been. Pete Rozelle didn't have a hand in this one. There are no Roman numerals in past performance lines.

Yesterday's renewal was the 34th, and was designated in the shorthand of the day as BC17, for 2017 no doubt.  I've never been to the Breeders' Cup, even with the few that were held at New York tracks. Too expensive to attend, and sometimes too hard to get tickets. Winning is tough enough without adding a cost prohibitive overhead to the equation. However, I've always been able to bet on the races however, thanks to Off-Track wagering and XPressbets.

But betting has always meant getting or downloading the Classic Past Performances from the Racing Form.  Thirty-three straight years of doing this, poring over more races, swollen size fields, and many, many foreign horses whose past performance are difficult to compare with the domestic past performances. European racing is mostly run on turf, at tracks, or courses with odd configurations, and hardly level surfaces. They go up hill. They come down hill, They bend to the left. They bend to the right. They split into two groups during the same race and race to the wire.  The field can resemble a swarm of birds giving those of us below an air show. The racing in Europe is the equine version of cross-country racing. It can be hard as hell to pick a winner. And hard as hell to win overall.

This year I gave up. Tired of being buffeted by the long shots and the Europeans. I didn't download a single page, a single race of the thirteen races held over two days this year. This doesn't mean I didn't watch the races. I did. And as usual, the results were full of upsets and boxcar payoffs, with one winner, a New York bred, Bar of Gold, lighting up the tote board with a win payoff of $135.40. The exotic payoffs in that race were so large they could had been displayed with exponents.

But that payoff was in the 6th race, and the Pick Six didn't start until the 7th Race. So, even with a few more long shots, albeit of smaller dimensions, the Pick Six was hit, for $388,423. The incoming new Chairman of the Federal Reserve Board will be expected to make a statement on using wagering as a means to keep the economy humming.

But even though I didn't download, a single line of a past performance I did still bet. One race, the Classic.

Gun Runner figured big time to win. No need to learn this from a past performance. West Coast, a late-blooming 3-year old who I had in the Travers was also an easy pick to toss into the exacta bet. And while at it, throw in Collected, a Bob Baffert trained
4 year-old. Leave out Arrogate all together. He's shown no affinity for the surface at Del Mar, and has lately just plain shown no interest in winning. He has a great future behind him.

Box the three for a $1 and play the permutations with a modest multiple of six dollars.

It's great to watch a race and see your exacta leading the field. And leading it every step of the way, all the way to the wire, despite some crazy fast fractions for a mile and a quarter race

Joe Drape and a fellow NYT prognosticator picked Gun Runner. It wasn't really all that hard. At the book signing for his book on American Pharoah at the Northside book store in Saratoga in 2016, Joe told the assembled that the really good horses take charge of the race, they head for the front, try and stay there, and control every call. It was in his pre-race comments in the paper yesterday. Gun Runner does that, and did that yesterday.

When Joe said that I immediately though of Dr Fager, the horse I fell in love with when I first went to the races in 1968. He wanted the lead, and pulled his jockey out of the irons to get it. He was so known to want that lead that a rival trainer, Frank Whiteley, would stick a "rabbit" in a Dr. Fager race, Hedevar, to soften the big guy up for Damascus to come from behind and pass the weakened Dr. Fager. It did work. Once.

Not all champions win from the front. Forego didn't. Zenyatta didn't. Gun Runner's style may not be unique, but it is successful. In this year's Whitney at Saratoga, Gun Runner famously annihilated the field while even carrying another horse's shoe in his tail. The shoe had flipped off a hoof during the race. It's a great picture. You can almost claim he won because he had 5 legs in that race while every one else had four.

As much fun as it was to watch Gun Runner win it was also fun to watch his trainer Steve Asmussen react to the win. Asmussen has a head of bushy silver grey hair that looks like a wild thicket. With his excited jumping up and down, hugging and arm waving his sun glasses dislodged from his face and disappeared into his hair. It happened more than once.  Asmussen became Gun Runner, with an object disappearing into his body. He was an Al Hirschfeld portrait with 'Nina' somewhere in his hair. It was fun to watch.

Exactas are nice, but triples are better, but I don't generally play them, and I didn't this time. I was very satisfied to hit with my only bet, getting $17 for every six dollars bet. A better ROI than on than most investments. A modest return, but one I hit without downloading a thing and spending hours scribbling on.

This is the way to win playing Breeders' Cup races. It's the beginning of a beautiful relationship.