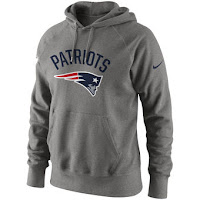 It is not often you get to actually take a hypothetical premise and make it a real one. One of my hypotheticals has been to quip would an owner of a jewelry store buzz Patriots football coach Bill Belichick in if he presented himself at he front door wearing what he is usually seen in: a hooded Patriots sweatshirt and an equally rumpled look on his face.. I've seen a sign at the local jewelry store that they will not admit admit anyone wearing a hoodie.

We were in Cap Cod recently seeing my wife's cousin. The cousin lives in Craigville, and we were staying in Hyannis. We've done this on several occasions and on this one we mentioned the stores along Main Street in Hyannis, and some pieces of simple jewelry my wife bought for Christmas presents.

At the mention of jewelry shopping, my wife's cousin told of her childhood friend who owns one of the stores we had somehow managed not to go into. Smelling discount we purposely went back to Main Street the next day and flouted the relationship. Without even asking, a discount was offered that allowed us to buy two pieces that were going to serve as presents. The owner even seemed to remember my wife attending the same baby shower for the cousin's daughter, and being at my wife's cousin's 25th wedding anniversary party.

Transactions completed and Mary Ellen is headed to unlock the front door to allow us out. What better time time than now to ask: "Would you buzz Bill Belichick through your front door if he showed up wearing what he's always seen in?"