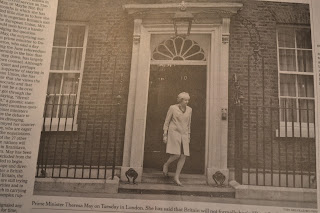 The saucy figure of Britain's Prime Minister Theresa May was captured by an alert photographer, Toby Melville, for Reuters. Caught leaving 10 Downing Street, unaccompanied and apparently without even a handbag, Ms. May was photographed in mid-step, leaning left.

According to her press releases, the left-leaning Prime Minister is still headed toward the Brexit signs, even though she has said she doesn't want to start the withdrawal clock until the first quarter of 2017, otherwise known as next year.

Photos of Ms. May have not been seen in number ever since she was elected prime minister, leaving her significantly behind Germany's Chancellor Angela Merkel in the balloting for world's most photographed woman with clothes on.

This is true even though Ms. Merkel herself seems to have dropped off the media pages as she tries to regain favor with the German people, favor greatly damaged by her refugee immigration policy. Ms. Merkel still holds a sizable lead.

Ladies, it is still a race.