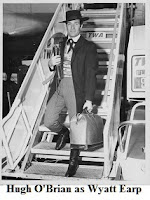 Live to be 91, and more than half a century beyond your most famous role as TV's Marshall Wyatt Earp in 'The Life and Times of Wyatt Earp,' airing in the golden age of the TV western from 1955 to 1961, and it is no wonder that when you finally, officially move on there are those who react to your obituary with: "Hugh O'Brian was alive yesterday?"

Well, maybe not yesterday, since I'm a little behind, as usual, with the newspapers, but he was alive this past Monday, at least until he passed away some time during the day.

In the golden age of TV westerns I was pinned to the TV, when of course it wasn't being hauled out the front door and down the steps to the repair shop to be worked on for an interminable period of time, all because it couldn't be fixed while it sat in our living room.

I have a permanent image of the repairman squatting behind the set, holding a mirror out in front of the screen, while at the same time trying to determine what the set was doing as he fiddled with knobs in the back, from spots that were inaccessible to us mere mortals because removing the perforated Masonite back of the set was not advised, protected by a serious looking warning label. No one in my family wanted to risk electrocution. That's what the death penalty was about, and it happened further upstate at Sing Sing.

But Hugh O'Brain's Wyatt Earp was on for six years, and the set was not always on the blink. Thus, I got to see Hugh in one of my favorite TV shows.

I also got to see him in his musical acting side, which was alluded to in the NYT obituary. The show I saw him in was not mentioned, but that might be understandable. It was a long time ago.

A revival of the musical 'Guy and Dolls' was performed at New York's City Center, on 55th Street. It was perhaps 1965, and I was still in high school, but left alone, I was adventurous.

I convinced my friend Georgie from the Chinese laundry down the block from the flower shop to come with me. I have no idea what the tickets cost, but even by 1960s standards, it wasn't much. Otherwise, we wouldn't have been able to go.

Hugh O'Brian played Sky Masterson, and Jan Murray played Nathan Detroit. It was the first time I ever saw a musical live, and it left me smitten. Vivian Blaine, from the original cast of course played Adelaide, the long-suffering fiance of Nathan Detroit, who in 14 years of courtship, only ever got as far as Saratoga on the train headed to matrimonial Niagara Falls. She needed a train with less stops. Perhaps an express.

Stubby Kaye played his show-stopping role of Nicely-Nicely Johnson, who shared his dream with a revival meeting audience. B. S. played Big Julie, the man with the dice that had no spots, but who just so happened to have a handy memory of where they were once they were rolled. Always in his favor, of course. And if you complained, Big Julie showed you his heavy iron piece.

It was only recently I was sharing the story of who was in the cast with someone who themselves sang in musicals, of a sort, when they appeared in the children's chorus in operas, with a few solo parts in 'The Magic Flute.' We were discussing the woman who had just passed away, Elena Doria, who was a longtime director of these childrens' choruses.

In Margalit Fox's lively obituary of Ms. Doria, she mentions that several alumni from her choruses give her credit for preparing them for high-level professional careers, not only in the performing arts, but also in other areas.

It is in one of these 'other areas' that Kris, the Canali menswear sales associate at Saks Fifth Avenue can be found, who will, given the right prompts, tell you all about his youthful singing career and Ms. Doria.

Something always reminds me of something else.