The Mexican beer Dos Equis has a new advertising campaign, introducing the latest "most interesting man in the world," a bearded, hairy hunk who is younger than the previous bearded, hairy hunk: 41 vs. 77 to be exact. The new guy additionally speaks Spanish.

But don't be fooled. The world's most interesting man just passed away, so it is understandable why he didn't get the nod for the advertising campaign. He wasn't going to be able to go the distance until he was replaced by another "most interesting man in the world." A Madison Avenue concoction. Mr. Coleman was the real thing.

The real title, deceased or living, truly belongs to John R. Coleman, a college president who tried blue-collar jobs and who just passed at 95. 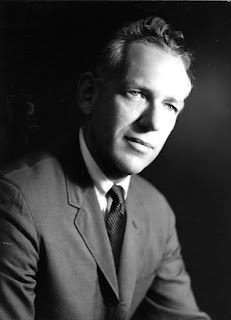 My first reaction to the headline on the NYT obit page was typical of the New York wiseguy: well, at least he didn't pass away quickly from manual labor. And indeed he didn't.

Mr. Coleman earned a full three column obituary, each column nearly the length of the page, accompanied by three pictures, the executive photo to the right, and my favorite, in one of Mr. Coleman's jobs as a street cleaner, the vintage version seen below. For some reason, these street cleaners, who I remember in New York. were called White Wings. They wore a white uniform and pushed that stiff broom along the curb, picking up the refuse and putting it into the wheeled barrel.

Years and years ago I remember reading about Wisconsin's U.S. Senator William Proxmire imbedding himself with a NYC sanitation crew where his best takeaway was that you never hold the garbage bag close to your body; you hold it out from your bofy and fling it into the back of the track. That way, anything that might pop out of the bag won't stab you. And that's how I've observed all sanitation workers to this day handle the bags as they fling them into the back of the truck.

There's always something to learn. And we certainly do learn about Mr. Coleman's vast number of pursuits in Mr. Grime's incredibly detailed narrative of Mr. Coleman's life. 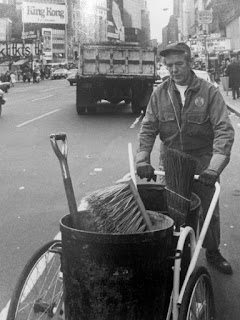 He wasn't just the president of Haverford College for a ten year period. In his pursuit of analyzing what he saw as the gulf between academic life and manual labor, he took jobs as a street cleaner, a prison guard, a prison inmate (if that in itself can be called a job), a sewer line ditch digger, a farm laborer and a cook.

Mr. Grimes deftly avoids the word 'polymath,' as he also steers around calling Mr. Coleman a Walter Mitty-type character. He was also no George Plimpton, taking a job for a fancy turn and then walking away to write about it. He worked at these jobs, even if his term of employment was once cut short because he had to attend to his duties as chairman of the Philadelphia Federal Reserve Bank. There were meetings to attend, and he couldn't be in two places at once. Mr. Coleman had a doctorate in labor economics.

A timeline narrative of Mr. Coleman's life sees him earning an undergraduate degree in economics, serving in the Canadian Navy, pursuing graduate studies in labor economics on leaving the Navy, teaching economics at MIT, writing several books, one with George Schultz, later President Reagan's secretary of state, serving as chairman of the economics department at Carnegie Institute of Technology, being the dean of the division of humanities and social sciences, appearing as a lecturer on 'Money Talks,' a CBS series in 1962 in which he explained basic economic principles to the viewers.

In 1965 he worked at the Ford Foundation as director of economic development and administration, and later as a program officer for social development. The presidency of Haverford College was from 1967 to 1977, and it was from the sabbaticals there that he took manual labor jobs, to eventually write about the experience.

After leaving Haverford, as if he hadn't already done enough, he became president of the Edna McConnell Clark Foundation, seeking prison reform, and the cure for a tropical parasitic disease, schistosomiasis.  He opened his own bed-and-breakfast in Chester, Vermont, serving as host and cook, and later ran a small weekly publication, 'The Black River Tribune.'

He seems to have capped all this off when he served as a justice of the peace, presiding over one of the first same-sex civil unions in Vermont in 2000. Doing the math, this puts him near 80 when he did this.

Mr. Coleman is reported to have have married twice, and been divorced twice. Divorced no doubt because at times in his life he was so busy he probably didn't even remember he was married.