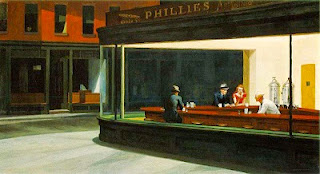 In the mid 1960s I completed my ethnic obligation of having to at least pass through the restaurant business. This required wearing a white apron.

I don't really know if selling hot hogs, French fries, sodas and knishes at Steve's Lunch from the Stillwell Avenue subway stop counts in some people's minds as being in the restaurant business. But it certainly did for Steve, the grumpy Greek owner who couldn't understand why he (therefore me, for a while) couldn't sell as many hot dogs as Nathan's, which was right outside the station, diagonally across Surf Avenue. Translation: Coney Island, long before hot dog eating contests.

Anyone who has passed by a restaurant knows that around 4 o'clock there is no one eating lunch or having dinner. If it's a tablecloth restaurant, the staff is having their meal, which can sometimes be  seen from the street. There's a definite lull in the business. And so it was with manning the hot dog counter at Steve's Lunch.

No one was headed from my right to the left, the direction leading to Coney Island and the beach. The bar across the passageway in the station was virtually empty. People were drifting from my left to the right, the direction from Coney Island back to the subway. No one was buying anything.  I did recognize some who when headed to the beach earlier had stopped for something to eat. But not now. It was going home for dinner time.

It wasn't then, but a few years later when Rod McKuen was getting big that I heard someone say they loved his line, "too late for the beach, too early for the bars." It was a perfect description of the quiet time, the lull that is produced in the 4-5 PM time slot.

I've always loved that phrase. It turns out it's from a song Rod wrote in 1965, 'Time Gone By' and is on his LP 'Rod McKuen Sings His Own.'

Rod McKuen recently passed away and the obituaries correctly captured his vast appeal and lack of critical praise. He was hardly deterred by intellectual carping. He maintained his commercial success, and apparently lived in Beverly Hills. He did quite well.

In the 1960s, admitting you might like a Rod McKuen lyric or poem was to lower your standing in critical circles. But when his works were sung by Glenn Yarborough and Frank Sinatra you paid attention.

True, he wasn't T.S. Eliot, Yeats or Auden. But there could be a resonance in some lines, and maybe that's all it takes to be remembered.