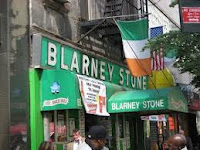 In between reading night-stand novels I sometimes pick up one of my books of Joseph Mitchell columns and short stories. Like popping into a bar for a few just to say hello, I treat myself to a couple of handfuls of words, have a few "page-tales", and then head out to dreamland.

I like to think that if the high school guidance counselor, Mrs. Bittkower, that I visited years after graduation and after not gaining traction at two institutions of higher learning, had sent me to the New York Times rather than a health insurer, my life would have been different. Maybe.

I would have fallen in with the same crowd no matter what. I certainly came in at the outer edge of the places that Mr. Mitchell was writing about in the 1930s. Bars, joints, gin mills, saloons.

I read an obituary of Robert McG. Thomas, the famous Times obituary writer that said he left Yale to major in New York. I can't claim attendance at an Ivy League School, but I did seem to major in work, pool, New York Ranger games, anything else Madison Square Garden, race tracks, Blarney Stones, Spotlight bar, Carnegie Deli, roller hockey and running.

If at the Times, I might have worked my way up to a byline, as Mr. Mitchell did at TheWorld and The Herald Tribune. No matter. I get to read what he wrote, and remember another era.

One of Mr. Mitchell's collections is 'My Ears Are Bent,' a collection of newspaper columns, arranged in groups, one of which is 'Cheese-Cake,' another 'Drunks.' The book was first copyrighted in 1938.

In the 'Cheese-Cake' section there is piece titled 'Some Virgins, No Professionals,' a discourse on burlesque and its workers, male and female. The title apparently stems from the stock answer a theater producer would give the court when asked about the morals of the women who might have been arrested in a Vice and Morals crackdown on the show's content.

If Mayor Bloomberg is thought to be the Nanny for New York City, Fiorello LaGuardia was the Deacon for decency. Burlesque was eventually outlawed, slot machines were removed from candy stores, pinball machines disappeared from bars, along with Indian dice games.  Drinking and smoking did remain.

Mr. Mitchell describes one of the top burlesque producers, Emmett Callahan, who was married to Ann Corio, a headlining stripper. A legend. I missed the burlesque era, but heard plenty about it, and plenty about Ann Corio.

In the 1960s she produced and starred in an off-Broadway production of  'So This Was Burlesque,' at the Second Avenue theater on 12th Street. The theater would later see the start of the musical 'Grease.'

I never got to see the show. I was too young. I did however have the not-so-enviable task of delivering roses to the show nearly every night. These apparently were used by Miss Corio in her act, as she pulled them out of her G-string and tossed them to the audience as part of her finale. At the flower shop, we of course removed the thorns before delivery.

What Ann Corio could look like in the 1960s after a career of  taking her clothes off in the 1930s remained a mystery to me. I never even got backstage. I had to deliver the flowers to the box office where some guy took them. All doors closed like submerged submarine hatches. I never got to see a stripper. LaGuardia was dead, and I was still shut out. However, I did eventually get to meet someone who worked in burlesque. A comedian.

At the end of Mr. Mitchell's piece on burlesque he quotes a stripper who comments on how she liked what the comedian Joey Faye said in Philadelphia the other night. He put down the attractiveness of a rival's burlesque strippers by claiming that the mother of a current house cutie slipped off the runway at the 'Stars and Garter' and hurt herself.

Joey Faye. I met Joey Faye at Liberty Bell racetrack in January 1970 when New York did not yet have winter thoroughbred racing. He was with a group of like-minded guys trying to pick winners, freezing with the rest of us when a blast of cold air came in through the grandstand door. Our mentor, and older guy, Les, "Mr. Pace", knew Mr. Faye and introduced us to Joey. Never heard of him at that point, but did know about burlesque.

Joey had a 70-year career in show business. There is an absolutely hilarious 'You Tube' video of him on the 'Dean Martin' show. When Joey passed away in 1997 at 87, he even rated an 'Economist' obituary.

Imagine reading in 2013 about a guy in a 1930s column, and meeting the same guy in the 1970s freezing at Liberty Bell. That's longevity.

In the 'Drunks' section of Mr. Mitchell's book there is a piece titled simply 'Bar and Grill.' It happens to be about Dick's Bar and Grill. Mr. Mitchell doesn't explain why it was always Bar and Grill (and it was) because he didn't feel the need to explain the obvious.

Early on in one of my majors, the explanation was extracted from a veteran bartender that a bar had to have food. Of some kind. Good food, bad food, moldy food, but something that could be called food. You weren't supposed to drink if there wasn't anything to eat. It didn't mean you had to eat, just that it was there to turn down. Hence, grill. LaGuardia? I don't know.

One of the customs I read about in Mr. Mitchell's piece is 'shaking for drinks through a game called Indian Dice.'

Never heard of  'Indian Dice.' In fact, again early on, was told that no gambling of any kind could appear to be going on in a bar. A deck of cards was not to be even seen, and an open racing paper, The Morning Telegraph, wasn't to be bandied about.

Indian Dice is a game played with five standard die thrown up to three times to simulate a poker hand. A one is a wild card, and is generally picked to be an ace. The other numbers represent themselves. After the first throw the shooter can set aside die he feels are building a winning hand.The other die are then thrown in an attempt to improve the hand. Three throws total is the max.

If he feels he's got a good hand with just one throw, he passes the dice to the player to the left. That player then only gets as many throws as the previous player used. There is even a 'You Tube' video on how to play the game.  Mr. Mitchell would have loved it.

The loser bought drinks for those in on the game. This could get costly, even then. Eventually,gambling and pinball machines were outlawed. LaGuardia? Probably.

As said at the outset, reading the stories is to enter another era. Then there are the memories of my era.

Early on, my first public drinking occurred with two friends who were brothers. We all lived in Manhattan, so were were already there.

Drinking age then in NYC was 18, and between the three of us our ages didn't add up to being eligible for Social Security. But we were all of legal age, no phony ids. Draft cards. Ours.

One evening, near where the brothers lived, we picked The Horses Tail on 8th Avenue in the 50s as the place we'd like to start our evening in.

It was a corner place, with the entrance on the bias, somewhat like Delmonico's. The neon sign had an outline of a horse whose tail appeared to "swish," aided by the neon and the outline of two tails, as one was lit and then went dark as the other one was lit. Thinking back, it seems like a strange name for a place, but perhaps the horse-carriage drivers came in after circling Central Park later in the evening. The stables were close enough by.

The night we entered there was no one else in the place other than the bartender. Even at 7 o'clock, it seems it was too early for any crowd to be there. The bartender looked entirely unhappy to see us. Three young guys, likely from New Jersey (not), who were going to break his balls just by breathing.
He wasn't looking forward to serving us, but hey, we were customer, and bartenders hated entirely empty bars. Induced stickups.

So, drinks served and small talk was attempted. Mr. Bartender was weary already. There were several bowling trophies displayed behind the bar. One of the brothers, intimidated by no one, asked Friendly if he bowled.

Until then, I hadn't really paid any attention to the guy. But now that an answer was expected, I took him in. He was in his 40s, close-cropped black wavy hair, stocky, with a short-sleeve white shirt and an apron. He steadied himself for the reply by spreading both his hands behind him, holding onto the back of the bar and staring straight at us as if a spotlight had now fallen on him. He cleaned his teeth with a very loud sucking noise and told us, "I bowl like old people fuck. Not well, and not often."

We had a friend.