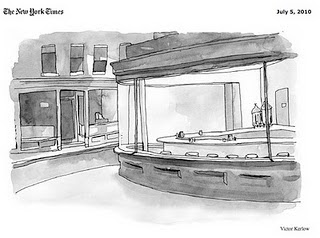 As is so often the case, incredibly one thing leads to another.

Yesterday, July 4th and people were over. One couple had never been over before. A tour ensues.

Melissa pointed to the print I have of Edward Hopper's 'Nighthawks.' It's a familiar scene and has been imitated with different people sitting at the counter. Melissa mentioned the Elvis version. We've seen that one too. With lights around it. Yikes.

Hopper's diner always reminded me of Peter's Grill, a corner establishment on 17th Street and 3rd Avenue, southwest corner, one block south from the family flower shop. The place had a huge curved window, a curved counter, and the usual coffee urns of the day. The place was fronted with so much glass I always thought it was impossible that it stayed in place.

A picture of Peter's can be seen somewhat in Lawrence Stelter's book on the 3rd Avenue El, a collection of remarkable color photos of the El taken along the route in the 1950s. In a telephoto shot, the sign that hung diagnonally from the storefront can be seen. Peter's Grill.

The walls were covered with diamond shaped embossed stainless steel. The place was plain as day and did serve food, but certainly didn't look like it had any to offer. I was in it enough times in the 50s and 60s. The owner was Peter Demas, and his son was a year ahead of me at Stuyvesant High School.

At some point in the 60s, I think, the place was torn down and I think an apartment house went up. So, why think about this now?

In today's NYT, on the Op-Ed page, Jerimiah Moss has a great piece, complete with the drawing captured above, on his search for the inspiration of Hopper's diner. Mr. Moss has done a GREAT deal of work, and basically comes away with the conclusion that the place never really existed as drawn, but was more a composite of Hopper's. It reminded him of an all-night coffee stand on Greenwich Avenue.

Mr. Moss expresses loss for what might have never really been there. But for me, I never even thought or considered where the scene might have come from, what city, what corner, what whatever. I never went looking for it. For me, it's always been Peter's Grill.

It always will be.