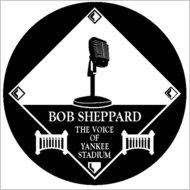 As it is with all great New Yorkers, you were either born here--or you were born someplace else. Origin of birth neither confers or withholds greatness. Birth only puts you on the planet. The rest is up to you.

Even the most rabid World Cup soccer fan knows by now that Bob Sheppard passed away on Sunday, July 11th. Bob was 99, and was one of the few who could be called a non-playing Yankee legend. He was of course the voice of the New York Giants and the New York Yankees, announcing lineups, batters and fielders for the Yankees since 1951. He was born in Queens, one of the four "outer boroughs" of NYC if you write for the New York Times.

Bob grew up surrounded by the precise speech of his parents, apparently driven by their joy in speech itself. We don’t really know if God has a voice, or what it sounds like, but Noah likely heard Him, or someone who sounded an awful lot like Bob Sheppard before he went ahead and built that ark. Otherwise, how else could we have gotten here?

And then we have the passing of George M. Steinbrenner, the principal owner of the New York Yankees who passed away on Tuesday morning, at the age of 80, just a little over a week after his July 4th birthday and two days after Bob Sheppard. Fireworks are a fitting backdrop to George's life.

I was at the Ali-Frazier March 8, 1971 fight at Madison Square Garden, the first of their three momentous meetings. The ring announcer, a legend himself, Johnnie Addie, didn't introduce many people. He merely motioned with his hand and said that anyone who was anyone "is here tonight."

No introduction or replay of George's life is needed here. He wasn't born in New York. But that hardly matters.

George passed away on the morning of the day that Major League Baseball would hold its annual All-Star game, this year in Anaheim, California, home of the Angels. There was nearly an entire day for all forms of media to recap and discuss George's life before the first player was announced in that night's game.

George, you didn’t do this on purpose, did you?