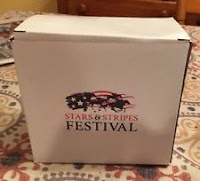 You'd think they we're giving something away. Oh wait, they were.

Yesterday's weather in the New York area was as nice as anyone could ask for. Sunny, comfortable temperature, no wind, no rain, no humidity. It was a good day to go to the races.

And that's exactly what two of The Assembled had now planned for over a week to do. The date, July 7 was circled on the calendar, and weather permitting—meaning nothing washed off the turf—that's where Johnny M. and Johnny D. were headed.

It was a surprise it was also a giveaway day. The schedule had been looked up, but nothing was noted that would indicate anything was going to be offered for free. So it was nice surprise to pay for admission and get a coupon to redeem for what turned out to be two nice water/beer glasses, that had 'Stars and Stripes Festival' stenciled on their sides, packed in a sturdy box. Suitable for wrapping and giving away to someone, if you were so inclined. Which I wasn't.

Much as I don't like having to carry anything extra around with me during a day at the races, the box didn't prove to be too difficult to manage, along with the clipboard, printed past performances, and binoculars slung over the shoulder.

And there was a crowd, or what these days passes for a crowd, for something other than the Belmont Stakes. It was noticeable. Were all these people still trying to leave the track after the June 9th Belmont? No. But a good number of them hardly looked prepared to play the horses. There were few with programs, even fewer with anything that looked like they were using past performances to enable their picks, and certainly almost no one with binoculars. I'm not not sure you can even rent them out there anymore.

Nevertheless, it was a crowd. And it was reported to be over 16,000, wagering a healthy $24.6 million on the 11 race card. Of course that includes simulcasting, the bloodstream these days that keeps racing going. But money is money. Track management had to be feeling good.

There weren't so many people that they created bottlenecks anywhere. I never waited to use a SAM machine, or had to line up for the bathroom. And since I don't bother with food or refreshments, I never wait on line for any of that anyway.

That announced crowd was paid admissions. I don't know how long the supplies lasted for the boxed glasses, but it didn't seem there were too many people walking around with them. What there did seem to be plenty of were credentialed track photographers. My God, there were pictures being taken left and right.

Aside from the usual scrum that floods the winner's circle, there was a semi-circle of shutterbugs that formed in an area carved out for them near the stairs and platform where a patrol judge can be seen climbing up to before the races begin. What this individual is responsible for noticing from that perch has been beyond me for decades. They are not one of the stewards, so I don't know if they alert anyone to an infraction, much less are capable of seeing one, despite the binoculars.

My own guess is that this is the paddock/patrol judge who makes their way from the paddock to the platform as the horses are ready to race. In the paddock they are responsible for ensuring that the stated equipment is being worn, or not worn by the horse. If they are supposed to be running with blinkers, are they there? If the blinkers are off, are they not there?

I will never forget one of the very few times I was ever in the paddock with a group of people who had a horse in the upcoming race, when the owner's trainer, Colum O'Brien, was called to the paddock office because the stated blinkers were either there, or not there on his horse. An infraction, which probably resulted in a fine to the trainer.

Thus, I had inside information that there was unpublished information about the horse's eyewear. This did me absolutely no good. The trainer was a low percentage trainer—near zero percent trainer—whose horse did have four legs, but was not able to move them with any sufficient speed to keep up with the field once the gates were sprung open. No change of equipment was going to help that horse win anything. I had a polite deuce on it to win, just in case.

But getting back to this extra area for photographers, it was there for the winning jockey and horse to pose before heading off the the winner's circle. It seemed to come into use when it was one of the five featured stakes races, a large part of the appeal of the day. Rich races, good horses, solid competition.

After a race, there is so much activity just outside the winner's circle on the track that you might think there was an accident of some kind. Grooms and assistant trainers duck under a rail to greet their charges as they return from their cool down. Like seconds in a boxing ring, these people have water and sponges to wipe the horses down before they are lead back to the barns. Instead of waving a towel or draping a robe over the fighters, a blanket is sometimes slung over a horse's back after they are unsaddled. The swirling activity fairly quickly ebbs as the attention goes to the winner's circle, and more photos. More photos than ever are taken these days. As racing attendance has declined, photos are up. Everyone has a camera these days.

So, how did the two Johns do on this great day of racing?

Mistakes are made in the afternoon shade
That are those that are repeated.
So often now it is a wonder how
The amnesia tank is not by now depleted.

This is an attempt at a poetic way of saying that after decades of playing the horses the same mistake is made.

The afternoon started well, with some early winners, even in the first race, always a good sign. Johnny D's numbers might not have been exactly humming, but damage was slight, and there was a surplus on the voucher heading into the last two races.

The plan was to only stay through the 10th race. And it was adhered to, The bets for the 9th and 10th races put the voucher at a value below its purchase price, but not by a great deal. And there was still the running of 10th race to make things better.

What causes one to ignore their by far two highest numbers—numbers that put two horses into what screams a boxed exacta bet—shuts down their senses and renders them deaf, with no memory of how these things usually turn out, to make them place a $6 win bet on Aidan O'Brien's Hunting Horn, forsaking the repeat exacta of Analyze It and Catholic Boy, is a force that comes from somewhere, perhaps from the Devil himself. The Devil made me do it.

Catholic Boy and Analyze It put on a rousing stretch finish that was a repeat of their finish in the Pennine Ridge on June 2nd. A looked for angle is to find if there are two horses in the current race who have just run 1-2 in a recent race.

If such a pairing is found, then it is in your best financial interest to look at this very closely and bet on the chance of its happening again. Because just like the advice given at the outset of the musical 'Guys and Dolls' about betting against a guy who claims he can make cider from a deck of cards squirt in your ear, you do not bet against this man, because if you do, you will have an ear full of cider.

Just like if you bet that Catholic Boy and Analyze It are not going to once again finish 1-2, you will not go home winning $35.40 for a $4 boxed exacta bet. Your voucher will still be worth less than what you put on it. Guaranteed.

Wipe the cider out of your ear. It happened again.