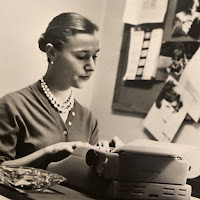 I read lots of obituaries. And every so often I wish I had been able to know the subject.

Take the recent NYT obituary for Anne Tolstoi Wallach, 89, a writer who worked in advertising, by Neil Genzlinger.

Ms. Wallach strikes me as thoroughly likeable women who is pictured working at the J. Walter Thompson advertising agency in the 1950s alongside two things you won't find in an office these days: a typewriter and an ashtray. She's also wearing pearls

Ms. Wallach's major claim to fame is that in 1981 she wrote a book, "Women's Work," about a fictional woman working in the advertising industry who becomes an executive in the thoroughly male-dominated ranks of that workplace, that received an $850,000 advance. It was a stupendous amount for a first time author. And while the book initially didn't do well, it eventually did when it was released as a paperback, allowing Ms. Wallach to write other novels.

She was married three times, the last marriage coming when she was 80 and George Maslon was 84. That was in 2009. Mr. Maslon passed away in 2013. They had known each other from their college days when he was at Harvard and she was at Radcliffe.

Along the way she had three children, two sons and a daughter with her first husband, Ronald M. Foster Jr. Both sons were born when she was working, and her "maternity leave" at the agency was her two week vacation, then her three week vacation for the second son, a longer period because of her longer employment by then.

I worked in an office during some of the same decades as Ms. Wallach, and I remember the maternity leave policy taking many forms. There was the incredibly progressive fully paid leave for six months, guaranteeing the same job on return; the whittling away of that benefit when overall pregnancy was viewed as a disability, ranked alongside abdominal surgery, allowing a four week paid leave. I'm sure there were other varieties of leave, but I no longer paid attention to them after my working wife had our second child.

I do distinctly remember a time in the 70s when one of the audit managers teased another audit manager who was pregnant that she really shouldn't have her pregnancy designated as a disability when in fact it was a self-inflicted injury.

She thought that was funny. Somewhat.