The Last Word in Curling. Maybe. 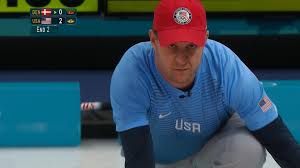 Take the latest example—and perhaps the last example until the four-year hibernation is over—that appeared the other day as the A-Hed piece in the Wall Street Journal.

Needless to say, the NYT gave the sport outsized coverage considering how few people are involved in curling outside of perhaps Minnesota. And now the WSJ contributes—quite uncharacteristically with no puns in sight— the following straightforward headline and sub head:

Consider the second paragraph, telling us of John Shuster, the U.S. captain:

"He gave the curling stone a clockwise turn that made it curve slightly right as it slid toward its target, the curl the sport is named for."

The third paragraph tells us: "This is puzzling sport to play—and so far impossible for scientists to explain."

Great. We land on the moon, send a probe to Mars, launch satellites and do all sorts of things in space, but can't explain why a curling stone does what it does? (We also don't seem to be able the build a reliable coin counting machine for the public to use in bank lobbies. They keep getting pulled from use for inaccuracies. But that, as they say, is a story for another time.)

Apparently, if you put an overturned glass on a smooth surface and spin in clockwise, it will curve left, opposite of what a curling stone will do. Likewise, a counterclockwise spin will send the glass right. Spin a curling stone fast? It will go straight. Spin a glass hard, it curves. The A-Hed piece comes complete with diagrams in color to illustrate the properties of these spins on the objects.

The spin and direction of a curling stone has been baffling scientists for nearly a century! Consider the following who have weighed in on it:

Surely because the game is played on a sheet of ice helps explain why scientists from cold-weather climates are interested in the physics of curling. There is no work cited from any scientists who might be doing their thing near the equator.

Will curling now go into broadcasting hibernation? Will a cable station spring up that covers curling matches live from curling clubs in Minnesota? Will curling spin get an accepted scientific explanation that rivals Einstein's theories?

The U.S. team captained by John Shuster that won the gold medal doesn't seem to search for scientific explanations. Mr. Shuster, a bit of a hefty fellow pictured above, tells us, "I just throw the rocks, man."