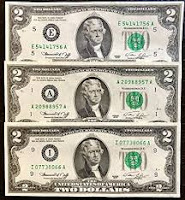 The WSJ has a recent A-Hed piece about the $2 bill being used for what I'd call "novelty tipping." There are those who load up on a supply of $2 bills and use them liberally when tipping bartenders and restaurant servers.

One big tipper, Norman Broshear, describes his use for the bill. When he orders beers and it comes time to tip, he slides a $2 bill onto the bar.  "If you order two beers, you're probably going to drop $2 in a tip anyway. But if you drop a $2 bill in, the person feels like they got a $5 or $10 tip. But it still only cost me $2." Mr. Broshear's way of creating income equality. Works for him.

Another fellow, Daniel Collette, a patron of the Olive Garden's Never Ending Pasta offering that allows him to get unlimited pasta meals in an eight week period for a $100 buy in, leaves a $2 bill, or two, as the tip for each meal. His thinking is since there is no bill for the meal's amount, he has no way of taking a percentage of an unknown (an educated guess I guess is out), so he resorts to the $2 bill method of tipping. He has even seen other Never Ending Pasta diners do the same.

It's a great A-Hed piece on other uses people have for the bill.
U-2 pilots use if for good luck. Apple co-founder Steve Wozniak has perhaps the most creative use for the bill, ordering uncut sheets from the Bureau of Printing and Engraving. He has sometimes attracted the wrong kind of attention from skeptical recipients of the cutoff bills, but for the most part gets away with the novelty of slicing off the currency from a master sheet.

Despite the issuance of the bill from 1862 to 1966, and then resuming production in 1976 for the bicentennial, I never handled many $2 bills in general circulation when I was growing up working at the family flower shop. In the 60s, the bill was described to me as  the "racetrack" bill. Patrons at the track might get the bill in their payouts, and then in turn bet it back into the system at the $2 windows. The basic racetrack bet was always $2 for the longest time. Most payouts are still quoted in terms of amounts based on a $2 bet. The $2 window however exists only in a museum, it if exists at all. You can still catch it in old movies, if you look closely.

For perhaps 50 years I've carried a $2 in my wallet for good luck. It is held together with enough dried-out Scotch tape to have wrapped a good size Christmas present. Where I got it I no longer remember. The bill is an example of the older $2 bill that was a United States Note, not a Federal Reserve Note, and had Monticello on the back, rather than the current portrait of the signing of the Declaration of Independence.

Using a unique piece of currency for tipping is nothing new, at least not to me. In August 1964 when I accompanied my father's friend and his son on a tour of Europe, the friend, an attorney in Washington, D.C., armed himself with a supply of the newly minted 50¢ half dollars that commemorated John F. Kennedy.

JFK of course had been assassinated in November 1963, and there was still a tremendous outpouring of sympathy for the slain president, nationally, and in Europe. He was revered by many.

Taking advantage of the symbolism of the coin, and its freshly minted newness, my father's friend would press it into say the cab driver's hand, tell a short story, and get away with a 50¢ tip. He bought his supply of half dollars at face value of course, so he was coming out way ahead.

Canada of course has eliminated any paper currency below $5. They replaced their $1 bill with a $1 coin called a 'Loonie' because of the single loon (bird) on the reverse. Canada had a $2 bill, but I'm not sure it was widely circulated. But they do have a $2 coin, the 'Toonie,' so called because of the two Loony birds on the reverse.

But wait. If you act now you can get the newly minted Toonie that glows in the dark, depicting the Northern Lights. It is Canada's newest coin creation and is touching off a hoarding fad. 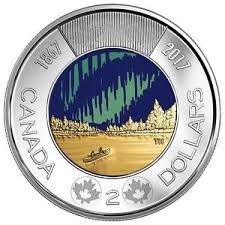 Short of counterfeiting, this is a great way to make money.