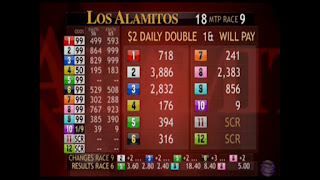 It is not news that attendance at thoroughbred tracks is not what it was. The sport is in constant proverbial "trouble." It needs...well plenty of people will tell you what.

No matter, to me it is no less interesting than it ever was. They still run races, and those races create history, no matter how many people are there watching and hopefully plunking down a a few bucks so they can say with glee they "had it."

There is a complete dearth of racing coverage in the general media, so it was with no surprise that I didn't know California Chrome was going to run in another race before his expected final race, the Pegasus, the $12 million Frank Stronach creation at a mile and an eighth that will be run at Gulfstream Park on January 28th.

The entry fee is a cool $1 million, with $7 going to the winner. There are 12 openings, or stalls that can be "bought" by people who don't even have a horse to enter. A young Midwest pizza tycoon is buying a stall and he doesn't even have a horse to enter. He will ostensibly sell his stall, or parts of it, to others who might bid on it. Mr. Stronach has turned the starting gate into a craps table, where the side bets are as good as the table bets. It is interesting. It is as if you can buy space in Trump Tower for the afternoon. Whoever thought a starting gate would have short-stay rates.

Through the magic of the Internet and Twitter I did get to see California's warm-up race after it was run. Even on replay, it was no less exciting to see him romp through a mile and a sixteenth at his home track of Los Alamitos in track record time, against a surprisingly full field of 9 other competitors, who were surely there to take other parts of the $180,000 purse that The Winter Challenge had to offer.

There were only 5,023 people there, but I'm sure they were completely enthusiastic to see their favorite horse run. The online writeups of the race say they were.

And here's where horse racing still provides me with visual delights of many types. Someone took a screen shot of the Los Alamitos tote board as it was displayed on a monitor of Chrome's race with 18 minutes to go to post time and Twitter posted it.

The to the uninitiated, it looks like a colorful display of numbers, perhaps an Excel spreadsheet done by one of the office's more creative types. But it is telling a story, a powerful story of Chrome's favoritism.

The numbers to the left of the colorful saddle cloth numbers are the current odds. This will change as post time approaches zero, and will settle into a final set of odds, but at the moment someone took the photo, Chrome, the 10 horse, is 1/9, with everyone else, aside from the 4 horse, listed at 99. Since a tote has never been able to show odds with three places, the 1/9 usually means the horse has drifted below 1/10 odds, or 10 cents to the dollar, extremely low odds. The lowest win odds can go is 1/20, or 5 cents to the dollar That's the mandated minimum.

And some people will consider a 5% return "guaranteed" return on a racing bet as good as buying savings bonds, or "safe as houses" as the British would say. These people are called "Bridgejumpers" because if their bet doesn't pan out it is expected they will leave their car and head for the railing and the water at the nearest span. No life jacket.

An urban legend constantly repeated by our mentor Les was that after Twilight Tear ran out of the money in a muddy race at Laurel in 1944, a shot was heard and someone fell backward off the grandstand roof. Twilight Tear went off at 15 cents to the dollar and was described in the chart's trouble line as having "quit badly." Twilight Tear always remained an object lesson to Les on a filly's perceived unpredictability. And also proving a Pittsburgh Phil (George Smith) axiom to never bet on a horse asking them to do something they've never done before, in this case, handle a muddy track,

The moment of the screen shot, capturing the extremely long odds on all of Chrome's challengers is to me as good as the photo I once took of the tote board at Greenwood race track in Toronto in the mid 70s. Greenwood is no longer there, but when it was it was billed as the only thoroughbred track next to a trolley line. It really was.

Well, with perhaps 10 minutes to go to post time, there are actually horses in the race with no money bet on them to show. There were zeros in the show pool numbers. I couldn't resist a photo. Eventually money did appear in the pools, but I always wondered what they would do if a horse with nothing bet on it to show, were to finish in the money. Payoff on the next horse down I might think.

Odds change as the betting progresses, and eventually Chrome stays at the 5 cents to the dollar that the tote can only show as 1/9, and some of the other horse drift down to 21/1 and other amounts, but with 5 horse still going off at over 100/1.

Chrome wins the race the race with the greatest of ease and sets a track record as well. His mile split is 1:34 and the final time for the mile and a sixteenth is 1:40. Very few horse are running faster at the end than they are at the beginning. Despite losing the Breeders' Cup Classic to Arrogate, Chrome should still be Horse of the Year.

With a $58,000 minus win pool in a race with no place or show wagering you might wonder why didn't the track management just run it as a non-betting affair? To their credit they didn't.

There was exacta wagering, with the 21-1 shot, Point Piper finishing second and paying $5.60 for a $2 exacta bet. A 9/5 return in a race with the mortal lock at 1/20 is not really a bad payout. Point Piper was second in the odds, and second in the race. Good betting pattern by the crowd.

There was also trifecta, superfecta, and super high five wagers, that have higher takeouts, so the track attracted bets on all the betting formats. And if they were able to get Chrome's name on the win tickets, who is going to cash those tickets for $2.10? The abandoned property for uncashed tickets will lower that minus money considerably, even if the name isn't on the ticket.

I don't think you will ever see a tote board, however briefly, with 8 horses at 99/1 again. Chrome is Halley's Comet.