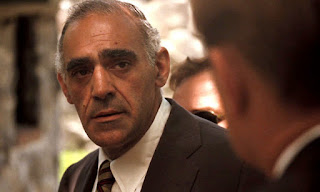 Abe Vigoda was going to get a bylined obituary no matter what. You can't be the source of perhaps one of the most memorable pieces of movie dialog and not be recognized when you go. I won't even fill the words in that go with the picture. If you don't know them, you can, as Casey Stengel said, "look it up."

When Mr Vigoda passed away the other day at 94, it was his second bylined obituary, his first being reported in People magazine in 1982.

There are distinct disadvantages to being reported deceased when you're not:

This last disadvantage is what lead Mr. Vigoda to take an ad out in Variety with a picture of himself sitting up in a coffin with a copy of the magazine issue that proclaimed his demise.

Another disadvantage to mistakenly being reported dead is that, depending on where you're living in NYC, the landlord might now consider the obligation to keep your apartment at rent controlled rates to no longer be in effect, and they can now list the apartment at market rates. NYC landlords are always rooting for a legal excuse to get someone's apartment removed from the rent controlled rates.

When I was no longer living at my grandmother's I left behind a checkbook for an account I had closed. My father's oldest brother, my uncle, rooted through the bedroom and wrote a check out from the checkbook to pay his rent for what was a highly desirable rent-controlled apartment on East 38th Street in Manhattan. He then went away on vacation somewhere.

When he and my aunt got back, there was an eviction noticed plastered on his apartment door. The bank obviously bounced the check. The landlord considered the tenant to be in arrears, and started to take action to remove the tenant and get a better market rate for the apartment.

Apparently, my uncle and my aunt were made from a little sterner stuff than the doctor in the movie 'The Hospital' who suffers a fatal heart attack after the Angel of Mercy wacko patient phones in a phony stock market report alerting the surgeon that his account has been wiped out by a plunge in value. Down goes doc.

After "straightening things out with the bank," my uncle and aunt continued to live in their rent-controlled apartment until their demise, when they really did stop paying the rent.

But back to Abe. One look at his visage and it was hard to believe, even alive, that he hadn't been embalmed. He had the Old-Man-in-the-Mountain look made famous as a tourist attraction from that that New Hampshire rocky outcropping. 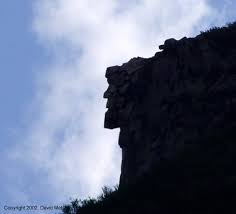 His most memorable role was undoubtedly his appearance in the 1972 movie 'The Godfather' as the old capo that Michael Corleone has put down. It was just before being led away for his last car ride, that Abe, as Sal Tessio, makes his final speech. Of course, being bumped off as a part in a movie is nowhere near the same thing as being bumped off by a magazine with the circulation of People.

How much the premature report of Mark Twain's death contributed to his "post-death" popularity is not known, but true to his wit he told enough people that the news was exaggerated.

Mr. Vigoda was rewarded in "death" with a bit of a resurgence in his career. As the NYT  obituary outqoute points out, "not everyone gets the chance to survive death and go on for 30 more years."

I hope he got his Social Security.