86 on the Tuna Salad 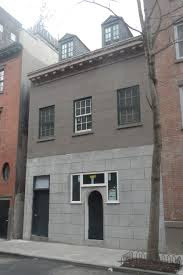 It is not often you come across a half address number in New York City. Half address numbers are usually the product of a small, or auxiliary building sharing a plot with a full numbered building. This usually occurs on a piece of property generally bigger than you might find on Manhattan Island--New York City.

So when Margalit Fox wrote of Ann McGovern, a children's book author who passed away at 85 and who once lived at 75 1/2 Bedford Street in the West Village, I experienced sensory overload. One thing lead to another, and soon I was experiencing a memory dump.

The West Village is a warren of streets that were laid out with no grid system in mind. They are generally name streets, and not numbers. But where there are numbers, there is a point that West 10th Street crosses, intersects, with West 4rd Street. This defies all logic of numbered streets in New York City. I had to get used to delivering flowers down there and avoid becoming like the song 'Charlie on the MTA', to never return. I can still get turned around down there.

Ms. McGovern once worked for Little Golden Books, a children's book publisher. I remember these books from my own childhood, and from the well-stocked stationery store in the same building as the family flower shop. I also remember the books were 25 cents and that at some point they weren't selling well. The publisher had the idea to make the price 29 cents, believing that with a 9 in the cents column people would think a bargain was at hand. The books weren't 30 cents, they were 29 cents. They weren't 25 cents either, but the strategy worked, and sales increased. A marketing genius was crowned somewhere.

Ms. McGovern's address for a time was in a building that apparently is considered the narrowest townhouse in New York. Thus, the 1/2 designation is even more understandable.

But the 75, or 75 1/2 also puts the house across the street from the famous Chumley's, a landmark tavern that was also a speakeasy/gambling den during Prohibition and is currently having trouble being rebuilt after the collapse of a wall. It was favorite of writers and lefties who loved Union Square Park.

During Prohibition, the tavern was apparently accessed through its front door on an alley named Pamela Court. The alley either no longer exists, or is not publicly accessible, but once inside Chumley's it apparently was like Cheers: everyone knew your name.

Since gambling and drinking were not legal, Chumley's operated as an open secret, but one that was occasionally subjected to do-gooder raids. When the police who were on the take called to tell Chumley's management that a raid was on its way, Chumley's translated it as a warning to its patrons that they had to "86" the joint. That meant clear the premises, and head for the back door that was actually 86 Bedford Street. In other words, get out, unless you wanted to spend the rest of the evening in a paddy wagon and general booking.

An episode of 'Elementary' this season has Sherlock explaining the origin of "86" and Chumley's to detective Bell. TV can be educational.

During some formative years I ate a good number of meals at a luncheonette lunch counter. This type of eatery is nearly extinct these days, best replaced by a diner, if you even find that, generally in what the New York Times would lovingly describe as in the "outer boroughs". A whole other story there.

Anyone paying attention would often hear an order being called back to the short-order cook as "down." This meant toast the bread, as in put the slices in the toaster and push them down. There were other phrases that I can't remember right now. Usually involving eggs, which to this day I do not eat.

But sometimes it was a two-way walkie-talkie with the short-order cook and the waitress. "86 on the goulash" could come back to an order. "86" is not what you wanted to hear if you were the patron and wanted to actually eat the goulash, because the waitress has been just informed they're out of it. No more left. Out of it. Get it?

At the time, I never knew the origin of the phrase "86," I just associated it with a meal that they ran out of. I sometimes wondered if there was an "85" that meant something. There wasn't.

And last of all, when I think of a luncheonette, I think of Harry M. Stevens. No, not a president, or a Supreme Court justice, but the name of the man and the business that held a strangle-hold on ball parks, racetracks, Madison Square Garden and other public venue concession refreshment stands. If you wanted a hot dog, beer, or soda, you were buying it from a Harry M. Stevens employee.

This was not just any employee of the company. The joke went that they all went to Harry M. Stevens "charm school", where nearly all of them learned to be nasty, slow, and rude to the public. It was if all they had tacks and pepper in their clothing and they couldn't help but be irritable. Diaper rash. And expect a tip to boot.

There was one fellow at Aqueduct racetrack I will never forget. If someone did happen to tip a Stevens employee, they put the change in a cup alongside the register and announced out loud, to themselves, "Subway." It's as if the bell had been hit at the carnival. This meant that someone has given them a tip that is equal, or in excess of the then 15 cent subway fare. Subway.

This one grizzled, nasty, cranky specimen who to this day I could pick out of a book of mug shots, expected my change to be his tip and was holding it back just a bit and was aiming it toward the cup. I glared at him, and he snarled, "You want your change?" "Yeah, I got a piggy bank."

I therefore only paid for what I ordered. The attitude I got I took for free.