The Start of Fire 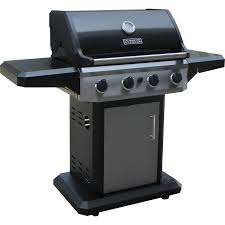 be an interesting read for anyone with an outdoor propane grill that is ignited with an ignition button.

My father would have said, "It's so simple it can make you cry." The old-timer at work (before that was me at work) would have said, "Read the book." And there certainly is something to say about keeping the user manual around for an occasional look-see, especially when the ignition switch fails to click and light any of the burners.

How many of you readers knew the ignition button is powered by a AA battery? I certainly didn't, and it cost me $99.98, plus tax, for the service call, only to find out that the battery, being the original, needed replacement. The guy did do a bit of grill cleanup, so I guess I got something else out of it.

I can understand why, when I called the servicing place in the area, they didn't ask me if I had changed the battery recently. My ignorance about a battery was their $100 gain, and with knowledge that valuable, it's understandable to see why they weren't giving it away for free over the phone.

A common failure of outdoor propane grills is that eventually the ignition button fails to do squat, and you're left to manually light the grill with a flame stick. This is no big deal really, but certain members of my family are not good at handling the knobs and the stick at the same time, and always call on me to do the manual lighting honors.

I don't mind, since the resulting fire will lead to cooked food for me to eat, but having a fully functional grill is not bad either, so I placed the service call.

The last two grills we bought came assembled, which relieved me of the 36-hour task of putting one together. It also relieved me of knowing a good deal about the grill. Prior grills I assembled had no battery starter. There was something resembling a manually produced friction spark that was relied on to light the gas. There's a reason the Army trains soldiers to take their rifles apart and put them back together. (At least in the movies.) There's no better way to understand something mechanical than to assemble it from scratch.

So, here comes the service man down the path to the backyard carrying not very much. A piece of cardboard shaped like tent, and a small stainless steel tool box. No packaging of replacement parts is in sight. And none is needed.

The service man reached for the button and unscrewed the collar at the base.  (Easily, from the top of the grill) and pulled out a AA battery and spring. He asked me when I had last changed it. Since the battery had a very unfamiliar brand name lettering on it that made it look like it came from Russia, I answered the obvious. "Never. That's the original battery." Yeah, the one I never knew existed.

I produced my own AA Duracell from the pile I keep in the garage and the service man inserted it. Right now, this is like a union electrician putting a light bulb in a socket. The ignition button clicked repeatedly when pressed, and when the different burner knobs were tuned on with the gas on, each burner poofed into a nice blue flame. How do you want your burgers, again?

I won't go into the ancillary cleaning steps that were performed, since they were nothing we didn't already know something about. I did find out that there was a neglected pan that was collecting a considerable about of charred embers that should have been emptied at about the same time as the start of the 2016 presidential election campaigns. You should get the idea of how long ago this was.

So, lesson learned, but I hope shared with others. I really can't wait to go over my daughter's and save them $100. Maybe I'll get an extra burger. Medium rare. Thanks.