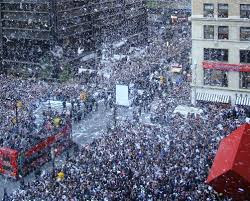 I had a uncle who at about the time Fiorello La Guardia was Mayor of New York City thought it would be a good idea for the city to give Amelia Earhart a ticker parade in the hopes she'd show up and no longer be missing. The idea was rejected by Hizzoner. My uncle was unfazed by the rejected suggestion and continued drinking.

I was thinking of this when the city announced plans for the ticker tape parade for the U.S. Women's soccer team that had just won its third World Cup tournament. It was a great gesture, and by all accounts everything went well this past Friday at the parade. The soccer team was not missing, and showed up in force.

If anyone has paid attention to the sidewalk along both sides of Broadway in Lower Manhattan, they would have surely seen the commemorative markers in the cement for the various people a parade has been given for. I was somewhat surprised at how many people connected with swimming the English Channel have been honored.  Gertrude Ederle, the first woman to swim the Channel in 1926 is of course there. She was a native New Yorker, an Olympic Champion and world record holder in five swimming events. A natural to have a parade for.

My own experience with ticker tape parades consists of watching the Apollo astronauts go by our offices at 2 Park Avenue in 1969 after the lunar landing. The parade route took a route that was headed for the UN that day.

Then there was the Canyon of Heroes parade for the World Champion Yankees in 1999. We could see a slice of that parade as it made its way up Broadway from our 29th floor World Trade Center offices. After the parade passed, and before the cleanup, I went down and gathered some balls of shredded paper as a souvenir. I jokingly handed some out to colleagues and kept one for myself in hopes it would be a lasting souvenir.

The souvenir part didn't last long, since everything in that office was lost to the destruction of 9/11. I did get two of my id cards back from the reclaiming efforts that went on at Great Kills, Staten Island, but that is another story.

Someday soon I plan to go back down to Lower Manhattan and walk the Canyon of Heroes parade route and take note of the categories of people who have been so honored with embedded sidewalk plaques. I know I won't see one for Miss Earhart, but my uncle did have a good idea: advertise.

It certainly worked when they plastered crime figure Whitey Bulger's mug on a Times Square Jumbotron in the hopes that someone would call in a tip and one of the FBI's most wanted fugitives would be found. Which of course he was in a matter of days.

It was even an idea that paid for itself. Secreted in the walls of Whitey's condo the authorities were said to find somewhere near $800,000 in cash.

It really does pay to advertise.