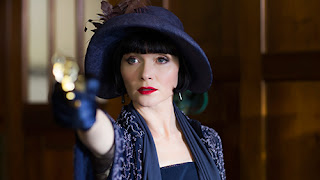 It is not new, but it is new to me. 'Miss Fisher's Murder Mysteries' on one of the public-TV stations. I've seen a few segments, but now seem to be getting them fed to me in series order. Last night I caught S1E1, the new shorthand telling anyone who cares, that it is Season One, Episode One. In the beginning.

The DVR is like a tossed fishing net. Set it out to program a series, like 'Masterpiece Mysteries', and it comes back with all kinds of possibilities that you weren't aware of. If you don't like what you caught, you throw it back with the Delete selection.

Miss Fisher, 'The Honoruable Phryne Fisher', as she in introduced, is a lady detective. The Honourable is a British designation indicating rank, given to children of Earls and Viscounts. A companion, a female doctor who dresses like a man, tells us Phryne doesn't come from money, but has a title. Socially she's up there a bit, but she's below the upstairs crowd at 'Downton Abbey', apparently.

If she doesn't come from money it only must mean she doesn't come from obscene wealth. Phryne  certainly travels and checks into some well appointed circles. And who paid for all those clothes? Where the producers of these shows get the backdrops and props to re-create the period is a marvel. The series is set in 1929 Melbourne Australia, so it has British flair, but is an Australian TV production.

Phryne Fisher, as played by a kewpie doll Essie Davis, appears in more scenes with more costume changes than Leslie Stahl in one of her '60 Minutes' segments. Phryne is "smashing." Phryne is high fashion, and never gets her lipstick smudged, even when she kisses someone. She is Nora Charles without the husband, the martinis, and the dog. She's got her own crew.

If Bruce Jennner really wants to be a women, then she should observe and dress like Phryne. There'd be no mistaking Bruce for a female if she looked and moved like Phryne.

Phryne is thoroughly modern in thought, packs a pistol as well as one of Marie Stopes devices that allows her to be selectively amorous without creating an unwanted pregnancy. She is a 'Downton Abbey' Lady Mary without the big house. She knows real cocaine when she daintily licks some off her finger and can dance the legs off anyone. She drinks socially, but has not been seen smoking. If you could, you'd like her to meet your mother.

So, the U.K. crowd has given us a summer of male and female eye candy. Ross Poldark is the hairy chested brooding hunk, who scythes the meadow with his shirt off. And Phryne Betty-Boobs her way into solving the least complicated of crimes ahead of the two man Melbourne police force, lead by Inspector Jack Robinson.

Labor Day is a bit off, and it looks like we'll have a summer of recorded TV to get us through the heat waves and menu of grilled hot dogs and hamburgers.

Thank God there will always be an England. And Australia.