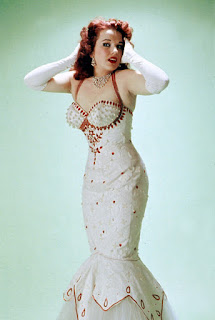 It's rather amazing that a man who was born in 1917, served as a United States Congressman and United States Senator, and tragically as an assassinated president who left us 52 years ago, could still be mentioned when it comes to liaisons with hot women.

Of course they weren't described as "hot" in JFK's time, but that's only a word that leads to the end result: a roll in the hay, at least once, and perhaps many times with some of the most desirous and glamorous women of his era. And he did this with a bad back, injured while serving his country in the Pacific in WWII. The nickname "mattress Jack" was well earned.

What is it about women whose last name is Starr? There was Belle Starr, the female companion of Jesse James. Hard to tell what she might of looked like underneath chaps and a gunbelt, but surely Jesse found something he liked.

There was Brenda Starr, the comic strip about a glamorous, adventurous red haired, well-endowed reporter created in 1940. Was Blaze the model for Brenda? Looking at Brenda today, one gets the uncanny feeling she was, while also bearing a striking, much latter-day resemblance to Debra Messing when she was on 'Will and Grace'. 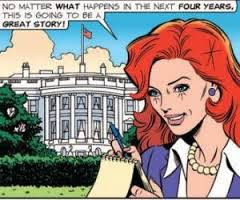 It's interesting to compare two obituaries about Blaze. The NYT of course refers to the well-known relationship with Louisiana Governor Earl Long, and it being the basis for the Paul Newman, Lolita Davidovich 1989 movie, 'Blaze.'

They also infer there was a brief relationship with JFK when he was a Senator in the 1950s who met Ms. Blaze after one of her Baltimore strip club performance. Talk about a back stage pass.

The British newspaper The Telegraph provides statistics about Ms. Blaze's endowments: 38DD. The NYT does not. The Telegraph does not mention JFK, possibly because the British readership of 2015 might not know who he was. The Telegraph makes mention of the cameo part Ms. Starr had in the 1989 movie, a non-speaking role as I remember, having her appear in the dressing room in something flimsy, back by the door as the Newman character comes in to see Lolita Davidovich.

As for the measurements, I'm quite certain I've never seen a 38DD woman, up close, or from even far away. Talk about the required over-the-shoulder-boulder-holder. Don't leave home without it. Even trying to peek into the old Metropole Café in Times Square never yielded a view of such an endowed being. I remember publicity once of a stripper/dancer named Carol Doda who through implants achieved something even greater. She was Silicone Valley and Twin Peaks, all at the same time. But she was on the West Coast, so she doesn't count.

The closest I ever got to a Burlesque club was sometime in the 1960s when I delivered roses to the Ann Corio show at the Second Avenue Theater on 12th Street when she starred in 'So This Was Burlesque,' a nostalgia Off-Broadway theater show about the then bygone form of entertainment. My father through some connection secured standing, two seat passes for any performance at the box office if we provided the roses for the performances.

My father never really had a head for business. There were I suspect at least six or seven performances a week that required someone, usually me, to make the trip from 18th Street and 3rd Avenue to the theater with a handful of red roses, gratis, that Ms. Corio would pull out of her G-string and toss to the audience.

I was not old enough to see these performances, so I felt sorely gyped at having to deliver roses, with no tip, to a box office that wouldn't let me though the theater's doors. And how many times could my father see the show anyway? Or, how many people did he know that he could comp with strip tickets? Not enough to make up for all those trips to 12th Street and the expense of the roses. Like I said, he didn't negotiate a very good deal. But then again, he might not have been using his brain for thinking.