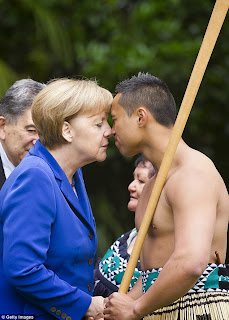 Chancellor Merkel was looking for telltale sings of bulk that might have been built up in the off-season; thus, the shirtless Rodriguez.

Results of the testing will be made available at the conclusion of the G20 conference now being held in Brisbane, Australia. But don't expect he Russians to admit or deny anything. They may even tell us there is no Russia.