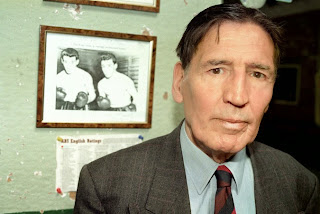 As anyone who has been paying attention to these blog postings might by now have realized, I've been reading obituaries for a long time. In a lot of settings, but usually on a commuter train, at my desk, or in my living room.

I have to say, if I had been reading the NYT obituary for Francis Fraser on a plane and there was the slightest of air turbulence, I might have been reaching for the air sickness bag. I have to say, I've never read so much about as revolting a character as "Mad Frank" covered in an obituary that spans two full columns of a major newspaper. It's a beaut, for a brute's life.

The picture of Mr. Fraser is the first clue, without even reading the caption. Mr. Fraser was 91 at his passing in a London hospital. The 1997 photo above shows a jacket and tie dressed man whose face resembles lumpy oatmeal, or one of those newly designed gold courses with plenty of grassy knolls on the way to the pin. He is not smiling, likely because there are aren't many teeth left.

Then there is the picture in the background. The Kray brothers in boxing glove poses? Twin psychopathic gangsters from the London underworld in days gone by?

But the second line of the headline is the clincher: "Cashed In On his Cruelty." The obit is by the newspaper legend, Robert McFadden. This gives you an idea that Mr. Fraser achieved so much fame for his deeds that his advance obit was written by a Pulitzer prize-winning reporter who has been retired for many years, but who themselves is still with us. The NYT obit editors been waiting a good number of years to spring Mr. Fraser's obit on us, but it had to wait until the man turned 91.

Mr. Fraser practiced dentistry on dead-beat clients whose movements were not prevented by an application of Novocain, but rather by virtue of being nailed to the floor. You expect he waived the co-pay.

A first season episode of 'The Knick' shows a New York City turn-of-the 19th century bookmaker- loan shark-sex procurer-drug dealer extracting a tooth in his office from a refined gentleman who happens to  be a hospital administrator who is behind in his payments. There is no carpentry in the scene, however.

Mr. Fraser spent nearly an equal number of his years in prisons of various sorts, as he did out of them. The near 50% ratio is really a bit more lopsided toward incarceration when you consider that they didn't pop him into a juvenile center until he was 17. He probably just wasn't bad enough until then, or that's when they finally caught him. For the first time.

There must he something so theatrical about the British that Mr. Fraser was such a celebrity outside of prison that he gave West End performances until the 1980s. As famous for their misdeeds as Willie Sutton, "Sammy the Bull," and the elusive Whitey Bulger were, I don't think there is any record of either of them playing Broadway.

There were plenty of ghostwritten autobiographies of "Mad Frank" in addition to his live performances, DVDs and CDs. Imagine, a British Pulitzer version for spoken word being awarded to Frank for mumbled word, and you get a sense of the adulation he received.

It is easy to be hard on Mr. Fraser and his lifestyle. But there were redeeming qualities, even in someone whose claim to fame was his cruelty. As he himself pointed out, "sure I was violent, but only to people like myself."

The police call this a community service.