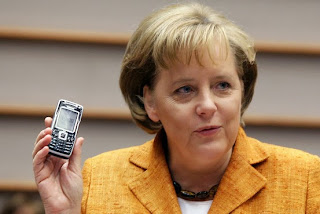 The fallout from the Edward Snowden disclosures about United States spying continues. It is now claimed that the U.S. spied on its allies and other world leaders.

Germany's Chancellor Angela Merkel is particularly perturbed and vocal about what she thinks might have been intercepted cell phone calls. Here she is seen at yet again another world conference showing off what she believes was bugged.

Off camera she's of course admitting that yes, she does speak to the Chinese.

She's told close associates that she hates to admit that she gets tired of that heavy German food, and has cultivated a taste for Chinese food from a hole-in-wall take-out place on the shady side of Berlin. They do deliver, too.

http://onoffram.BlogSpot.com
Posted by John D. at 9:38 AM