The World is a Noisy Place 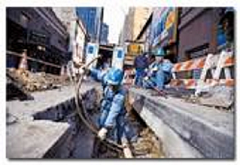 It is no secret I like to read Clyde Haberman's 'Breaking Bread' piece that appears every other Monday in the New York Times. Mr. Haberman takes in a meal with people who you might describe as being somewhat under the New York City media radar, but who, nevertheless contribute to how things are run.

Take the latest meal with Arline L. Bronzaft, an environmental psychologist, who even in her 70s helped revise New York City's noise code. Ms. Bronzaft connects back to the John V. Lindsay mayoral administration. This can date a person for sure. When I was a kid, anyone connected with the Mayor Hylan era was getting the door held open for them at the family flower shop.

It is also no secret that my train of thought can be thrown from the tracks like runaway tanker cars in Quebec. Mr. Haberman only needed to mention that the place they ate in was near Ms. Bronzaft's apartment on York Avenue and I'm seeing maps and hearing conversations about the Second Avenue subway, Avenue D and Burt Lancaster.

Ms. Bronzaft's field of expertise is how noise affects health. It's not directly mentioned in the piece but Ms. Bonzaft's apartment is two blocks east of the construction for the Second Avenue subway, as noisy and disturbing an endeavor as you can absorb, given the occasional sound of explosions in peacetime.

Second Avenue subway. There was one once. It was an elevated line, that connected to Astoria via the 59th Street/Queensboro/ Ed Koch bridge. A family heirloom is a destination sign my father took from one of the trains as a kid. It is a black metal rectangle, with stenciled white letters, that would tell you that the train was headed for 'ASTORIA VIA 2nd AVE'. My daughter now has it in a living room bookcase.

Astoria was where North Beach was, which was the area that was later turned into LaGuardia airport. My father recalled being hustled off by his mother with fruit in a paper bag, along with some of his brothers for a day at the beach. It beat diving into the East River off 32nd Street, which was another way they got wet.

York Avenue. Never knew until I read it referred to in a Peggy Noonan column that it was named for Sergeant York, a WWI Congressional Medal of Honor recipient who was born and died in Tennessee. His connection to New York is not immediately understood, and so far goes personally unresearched. He might have had lunch here, or made a speech.

York Avenue. An old-time neighbor in Flushing who grew up in East Harlem told be that it was once named Avenue D. He also told me that when he was growing up there were guys who knew Burt Lancaster as a kid, and that Burt was called 'Dutch.' Burt came from that area.

Burt's not around to ask about York having once been Avenue D. My old-time neighbor is not available for further questioning either.

But my fate is clear. As long as Mr. Haberman reports on a meal he's taken with someone in any of the five boroughs, it is going to dislodge, for a moment, some nostalgic and likely worthless piece of information from my brain.

It's up to you if you want to read about it.