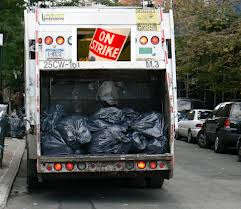 Once again, Mr. Clyde Haberman of the NYT has been sent out with a modest expense account allowance and been asked to break bread with someone. He does this every other week and writes about in a 'Breaking Bread' piece that appears in the New York section of the NYT. Where else?

The two weeks spin by fast, because it seems like yesterday he was just chowing down on pizza at Green-Weed Cemetery in Brooklyn. This time, he's found the anthropologist-in-residence of the New York City Sanitation Department. And it's a woman. Someone famous used to say, "I kid you not."

Robin Nagle has filled the unpaid job for the past seven years. It being an unpaid job has probably helped prevent it from being a campaign issue in the upcoming primary for NYC mayor. The candidates for mayor have certainly brought and unloaded a good deal of their own garbage to the proceedings, but this isn't about that.

Ms. Nagle, at 52, is attractive enough to even make her left shoulder tattoo look feminine. She holds a Ph.D. in anthropology, and teaches it at New York University. She worked as a sanitation worker for several months in 2004 and 2005, after qualifying by passing the physical. She's written a book.

It's interesting that there are those who sort of do a 'George Plimpton' with the sanitation job. It is demanding physically, (thus the nickname, New York's Strongest) so much so that when the workers went out on strike in January 1968 for several days, Governor Rockefeller refused to call out the National Guard to remove the trash. He claimed the Guard wasn't up to the task physically to do that type of work.

This has always remained amongst the oddest of explanations I can remember regarding NYC matters. Was the good governor being candid, or was he more than scared what might happen to the trash in front of this 55th Street townhouse when the strike was settled? It was a long time ago, and people have died, so we'll never really know.

Nevertheless, Robin passed the physical. I'm not sure if William Proxmire, a U.S. Senator from Wisconsin passed the physical when he embedded himself amongst a crew of sanitation workers. It was a long time ago, and it might have been a one day type of thing, for some reason or another. Senator Proxmire was instrumental in the 70s in preventing the funding to proceed on building the SST, a supersonic transport plane that by now would have surely joined the Concorde as obsolete. He was also famous for his hair transplants and his face lifts.

I don't think the good senator wrote a book, but the one take-away I have of reading about his experience as a sanitation worker was the proper way to get a black plastic bag into the back of the truck. You do not lift it and let it press against your body as you haul the sucker up. You never allow the bag to touch your body. You drag it to the truck, then fling it into the back. You never really know what's going to pop out of it, syringes, glass, sharp pieces of wood. I'm sure Ms. Nagle was just as careful as the good senator.

Now, an anthropologist activates images of people in hot, sandy areas bent over tombs and brushing sand and dirt away with toothbrushes. Somewhat like what is apparently going on in an excavated parking lot in Leicester, England, where the skeletal remains of King Richard III have been found, and now a lead-lined intact coffin with someone yet to be identified inside.

The site is too old for it to have been a Trans-Atlantic burial ground for victims of Whitey Bulger's unique brand of love, or a final resting place for Jimmy Hoffa if he was on vacation across the pond when he got whacked, or even Judge Crater, after he hailed a cab and disappeared into the ether. But what does an anthropologist-in-residence do for the Sanitation Department? It's fiction, but Peter de Jonge wrote a mystery, "Buried On Avenue B?" What if this were real?

You're just going to have to read the NYT and find out.