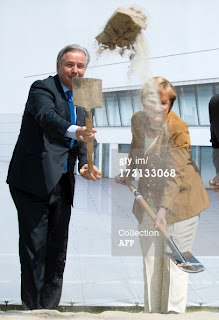 All news all the time. And it's always about Germany's Chancellor Angela Merkel.

She's running for election, and is seen here flanked by Robert DeNiro and Ray Liotta (partially visible, on the right) burying the opposition outside a German casino.  Angela is so crafty a politician that she allows a photo to be taken and tells the world it's about opening up some environmentally safe gas plant. She's unflappable, and unstoppable. Whitey Bulger is jealous.

Could we use her in New York? Sure. The coming Election Day in New York is starting to remind me of when I was in Toronto in November 2000. There were 28 people registered to run for mayor. Since William F. Buckley wasn't Canadian, he didn't register. The candidates were an eclectic bunch. The bottom tier of implausible characters reminded you of the characters in a Carl Hiassen novel: strippers, bartenders, bail bondsmen, bounty hunters, (running on the issue of keeping everyone safe) drag queens, and other exotic entertainers.

To have the sexually disgraced Anthony Weiner AND Elliot Spitzer emerge as candidates for public office in same election year is telling us something. Never remember.

Mr. Spitzer is running for New York City comptroller, which means controlling the money. He certainly did that in his prior episodes when he paid the girls in freshly withdrawn cash, and may have even received a frequent patron discount. He did have a code name: Client No. 9.

No less a person of a high social stature, Mary Lou Whitney, wanted to name one of her thoroughbred horses Client No. 9. Stamina.

And Anthony Weiner. The name alone says it all. If elected mayor, the New York Post can't possibly go out of business. They'd only have to sell their headlines.

Could Chancellor Merkel save New York from the fate of future headlines if she were to repatriate? Probably not likely to happen. When you can bury the opposition in broad daylight, why move?

http://onofframp.blogspot.com
Posted by John D. at 9:47 AM