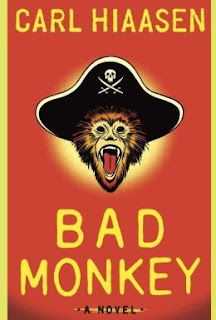 Carl Hiassen is back in local waters. And that means the Florida Keys and Miami. His newspaper columnist skills emerge quite rapidly as he introduces an array of characters and events that get your attention.

Mr. Hiassen is a writer who can give us within the first few pages a suspended detective who went batshit with a battery operated hand-held vacuum that introduced the long upholstery attachment into a sensitive cavity of the husband of his nymphomaniac girlfriend. He did this with the power on and fresh batteries, and in a busy public space as his girlfriend and her husband, an older wealthy, felonious dermatologist, were walking and arguing on a sidewalk near a pier. There are enough witnesses with cellphones pictures and video to fill a courtroom, which might be where they're all headed.

Meanwhile, his mature, attractive girlfriend has a past that would keep her on the cover of supermarket tabloids for weeks, and possibly on 'America's Most Wanted.'

Additionally, there is the newly elected sheriff, who is the suspended detective's superior. His elevation to the job occurred in an election where his two opponents were somewhat publicly unavailable, due to being caught up in the judicial system.

The incident on the pier was hardly a career move for the detective. But things look like they might work out and he will retain a municipal job that carries his pension over to a new job title: restaurant food inspector, a k a roach patrol.

Then there is the arm. The severed arm that starts the book off, that becomes frozen and examined, and transported as if it were fresh caught seafood up and down the Keys to Miami where it is hoped the rest of the body might be. The story starts on page three, and I'm only up to page 27.

I haven't gotten to the monkey yet, or the widow of the man whose arm is being kept locally, where people store Omaha Steaks and Birds Eye peas. I will get there.  I like to savor Mr. Hiassen's books, and absorb the language.

The covers of Mr. Hiassen's books are a delight in themselves. Simple, creative, colorful art work, that doesn't have to compete with a thunderous sub-title that tells us more of what's inside.

Disney, Sea World and Universal Studios are not Florida. They're in Florida, but are their own city-states. Mr. Hiassen works outside of these corporate principalities with what is the rest of Florida, populated with kooks and weirdos who might well exist.

In a bookstore interview with Mr. Hiassen it's easy to see where these people come from. He tells the audience that he saves newspaper clippings of people who have done odd things that draw attention to themselves. Sometimes legal, or police attention.

I will forever remember the newspaper story years and years ago of the inebriated New Jersey man who was pulled down from the peak of his house that he was trying to chain saw in half because half of the house is what his wife got in their divorce settlement, and he wanted her to literally get half.

Read the book, and see the rest of Florida that Mr. Hiassen knows so well.