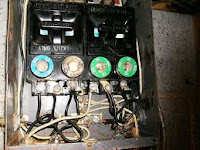 My son-in-law's father is a retired NYC police detective. He doesn't routinely tell the civilians stories, but occasionally one comes out. Senior was born and raised in the Bronx, and grew up around the corner from my wife. Despite being about the same age, they were unknown to each other. The potsy players didn't meet the stick-ball boys. The best I can tell, he spent his entire police career in the Bronx. Alas the Bronx, he knew it well.

During one of those gatherings that happen when people get together around the holidays, he told the assembled of the time he was still in uniform and he and his partner had to handle Saturday night noise complaints. A few apartments in the precinct we're known to be the party house, where the rug was rolled up and the dancing, drinking, and music kept coming. This invariably led to noise complaints being called in.

A response and a knock at the door and the message was delivered that they had to "keep it down." This was Phase I and had absolutely no effect, other than to make it easier for he and his partner to get there and deliver the message in Phase II. The difference was in Phase I the people answered the door; in Phase II they just waited for the messenger to go away.

Phase III was the best part. When the inevitable call came in that things were still swinging in 4-G, he and his partner didn't bother with delivering any messages in person. They gained access to the apartment house cellar (quite easy in those days), located the main fuse for that apartment, and on the assumption that someone on a respirator wasn't in the same apartment with all those singing, drinking, and dancing people, they yanked the fuse, basically giving the occupants their very own blackout.

In addition to this, they unscrewed, or broke the bare bulb lights that were near the fuse box, leaving that part of the cellar in darkness as well. They had their flashlights, with batteries that worked. This tactic was designed to delay any resumption in the festivities by the revelers in finding the fuse box, and more importantly, replacing the fuse. It was felt that at that point, and at that hour, "these drunks aren't ever going to find it." No Phase IV was mentioned.

It is now part of Super Bowl legend that last night's game was delayed when very soon after the halftime show, half the lights in the stadium went out. Play had to stop for something like an additional 30 minutes before the power came back on.

It is also part of Super Bowl legend at this point that Beyonce put on a sound and light halftime show developed by NASA which could easily have strained the stadium's power grid. A blackout ensued.

It's also possible that something more subtle was happening in that the producers for 'Downton Abbey,' tired of all the noise coming from the other channel, gained access to the utility closet at the Superdome, and pulled the fuse. After all, that most British of soap operas was due to share prime time at 9 PM with that rowdy New Orleans party.

It was a busy Sunday night. Of course we had all the hype, drama and reality of Super Bowl XLVII, as well as 'Downton Abbey,' for those of us who took that in as well.

So, what happened this week at the old place?

We get a reading of how much the upper-crust Anglicans dislike and distrust Catholics when his Lordship refers to them as "left-footed" and filled with "pagan folderol." Carson the butler, not to be outdone, questions their loyalty to the Crown. A spirited conversation at the dinner table with the vicar present neatly shows off how the Crawley sisters are no slouches at geography. They were tutored well.

We have Lord Grantham's mother, the Dowager Countess, as a woman who was likely at Queen Victoria's coronation acting like either Richard Nixon, or a 2013 drug company, when she basically asks Dr. Clarkson to skew the data surrounding survival rates from eclampsia and Cesarean sections.

But in a Clintonesque linguistic somersault, she neatly puts the music back in the unmusical word "lie" and gets her son out of the dog house. Bates, the valet, will be getting out of the Big House, and Ethel, the morally fallen cook for Mrs. Crawley, will stay out of the whorehouse.  Everybody gets to leave their latest house of confinement. The times, they are a-changin.'

Sarah O'Brien, Lady Cora's maid, gets to lay a Lady Macbeth plot that is sure to cause Thomas, the Lord's valet, some trouble when he pops his head a wee bit out of the closet. Everyone seems to be getting a bit back to normal, except for Carson and the assistant cook Daisy. Look for plot developments surrounding those characters next week.

Oh, and as for those Super Bowl commercials...fuhgetaboutit. Third Avenue trash.