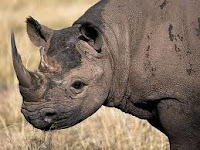 One of the joys of reading news stories rather than viewing them is that the well-written ones might contain a nugget of information that is just plain worth thinking about.

Take a recent story of the theft of rhinoceros horns and skulls.  This nasty business is driven by the price that can be obtained for ground up rhino bones that some attribute aphrodisiac qualities to.  China for instance presents a big market for this.

Never mind that chemically the ground up calcium is equal to eating your fingernails, as one scientist put it.  BIG, big money is in this, with the value of the product exceeding cocaine, gold, or heroin.

The story comes to us from the front page of the August 26, 2011 NYT.  It comes out of Ipswich, England, written by Sarah Lyall, who I think is their bureau chief over there. The market and the theft seems centered in Europe, but the reporter recounts a 2009 burglary in which a rhino skull was taken from a trophy-display wall of a check-cashing place in Albany, NY.

I've been to Albany, NY. I've been to check-cashing places.  It's completely beyond my imagination that the intersection of these two places could produce an opportunity for the theft of a rhino skull.

How does a check-cashing place in Albany, NY stray from the linoleum floor, dropped ceiling tile, fluorescent lighting, floor-to-ceiling bullet-proof Plexiglas decor of a check-cashing business that seems to be the universal design?  They generally look more depressing than NYC's OTBs did.

Of course, the place could have all these qualities, but they added the trophy case because of the owner's exploits.  Not impossible.  I was once in a diner in Derby Line, Vermont that had a stuffed polar bear, growling in an upright pose near the door. Frank's.

All of this just goes to show you, when there is market for something, someone will find the supply.